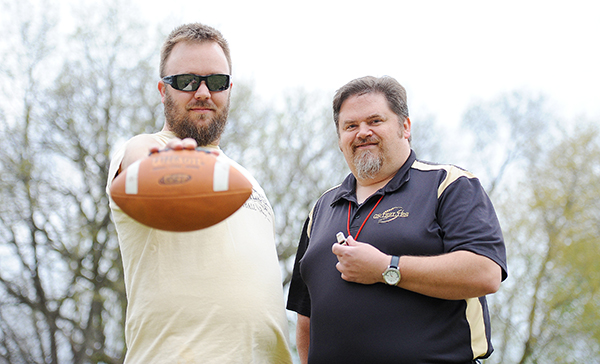 “We’re rolling out a new offense, we’ve got guys playing different positions and we’ve got a pretty good crop of new guys,” said Grizzlies president and offensive tackle Craig Schmidt. “It’s definitely a living being. It evolves every year.”

To add stability to a team with new faces in the backfield and receiving corps, the Grizzlies return their signal caller, Tony Tolbers, who has led the team since its inception six years ago. Last season, he completed 108-of-221 passes for 1,577 yards with 17 touchdowns and 18 interceptions.

Tolbers will have multiple new targets this year.

Brendon Brown of Osage, Iowa, is a first-year Grizzlies wideout loaded with talent, according to Grizzlies head coach Stephen Piper.

“He’s probably the fastest guy on the team,” Piper said. “His mouth runs constantly too, but he’s not one of the guys you want to punch. He’s one of the guys who makes you laugh and is just having a great time.”

At tight end, Anthony Ingram of Waseca is in the process of transitioning from defensive end. Last year, Ingram led the team with four fumble recoveries was third with 39 tackles and second with five sacks.

The Grizzlies’ backfield will be without its two top rushers from last season. Lamar Sayles and Sammie Rucker Jr. contributed 956 of the team’s 1,130 total rushing yards but will not return.

Filling the void will be Jason Kuipers and Kaelyn Kohtz.

Kuipers was a former Albert Lea High School football standout and the Grizzlies’ MVP in 2011. He missed last season with an injury, but led the Grizzlies in rushing in 2013 with 655 yards on 141 carries.

Along with Ingram, Kohtz moved from defense to offense. Last season, Kohtz made 55 tackles, which was second on the team. This year, he’ll be in the backfield. Piper said Kohtz, a Sutton, Nebraska, native, already has years of experience at his new position.

“Kohtz has been a running back from fifth grade up until he started playing for us,” he said.

The offensive overhaul was a result of a rule change last season that allowed limited blitzing.

“It was definitely a learning experience,” Schmidt said. “I think we’ll be more prepared this year.”

Blitzing rules were discussed Saturday during a Southern Plains Football League meeting to provide clarification for all eight teams, Piper said. Players can blitz from within a box that is six yards out from both sides of the center and five yards ahead of the line of scrimmage.

“We’re half a step away from all-out blitzing,” Piper said. “But our quarterbacks have day jobs and have to go to work in the morning. So that blind-side corner blitz, we took that out.”

Not only did Grizzlies players make position changes, one coach did as well. Jeff Jimenez returns to assist Piper as defensive coordinator. However, last year’s offensive coordinator, George Gerdes, will play linebacker this year. When the league originated, Gerdes played running back.

“George thinks he has another year in him,” Piper said. “He moved to defense so he can lay the hit instead of being hit.”

If prospective players are on the fence about trying out for the Grizzlies, Piper said having motivation to play is a must.

“For me, football is forever,” he said. “I don’t think that you ever get away from it once its in your blood. If you’ve still got the fire and you really want to get after it, this is the way to do it.” 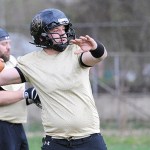 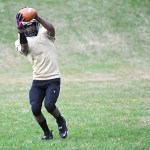 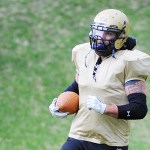