Have brush, will travel 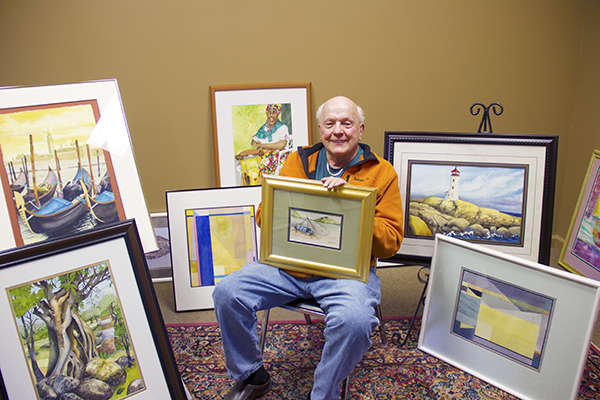 “Have Brush, Will Travel” is an apt name for the James Wegner exhibit at the Albert Lea Art Center from April 14 to May 16. While surrounded by all watercolors in the photo, his exhibit pieces also include pastels, colored inks, prints, collages and acrylics. He is holding “Yangze Fishing Boat,” a scene from China. In the lower left is “Ancient Tree” inspired by a trek to an Aztec ruin in Mexico. In the upper left is “Venice.” Behind him on the floor to the left is “Quarry Spring” and above it “Caribbean Drummer.” In the lower right is “Quarry No. 6” and above right is “Peggy’s Cove,” inspired by a scene from Canada. – Cathy Hay/Albert Lea Tribune

Each painting tells a story from Austin artist’s global journeys

Each of the 30-some art pieces of James Wegner’s exhibit at the Albert Lea Art Center tells a story of his journeys, both physically to different places and artistically with different media, techniques and styles.

The exhibit, which is entitled “Have Brush, Will Travel,” will open for a month on Tuesday with a reception from 5 to 7 p.m. Thursday followed by Wegner speaking at the Dorothy Godtland Lecture Series from 7 to 8 p.m.

Wegner, of Austin, taught at the junior and senior high schools in Austin for 10 years and then at Riverland Community College for 28 years. He retired from the college in 1995; the art gallery at the Austin campus is named in honor of him. Wegner now teaches through the Austin ArtWorks Center.

Wegner is also a storyteller with a hearty laugh and engaging manner. The Art Center is grouping his paintings by country, and Wegner plans to tell their stories at the lecture series.

For example, the catalyst for “Ancient Tree” was a side trip into Aztec ruins while on a Mexican Riviera cruise, an excursion described by the touring company as “moderate” exertion.

“If we’d been billy goats it would still have been challenging,” Wegner said, describing the steep climb up and down rickety stairs without handrails. The site had little left of the Aztec settlement but the ancient tree captured Wegner’s attention.

“I got fascinated with this tree,” he said. “I just love doing trees.”

He also has an affinity for rocks, not surprising given his growing up in the granite district of the St. Cloud area. Quarries were his inspiration for geometric abstract pieces.

“Simple forms derived from nature become my primary concern,” Wegner said in his artistic statement. “I like to work directly with my material, allowing the forms to emerge as natural and uncomplicated as possible. The things an artist makes become the best testament to what he feels and believes.”

His newest painting, “Peggy’s Cove,” is a watercolor from a trip to Nova Scotia in Canada.

“The very newest,” Wegner said. “If it was oil it wouldn’t be dry yet.”

He captures his scenes with a sketchbook and camera, painting them later from initial impressions. Sketches and photos are essential to catching the time of day in light and shadow, he explained.

Many of his paintings are watercolor, a medium with little room for error. There is no painting over or scraping off mistakes as with oils and acrylics, though with good paper and paints Wegner has found he can make minor corrections.

He likes to use non-staining transparent colors. Watercolors also require a painter to think through to how the final picture will look, doing the background and distance first. Preserving the whiteness of the paper is also important for the painting’s brightness.

Wegner has traveled quite a way from growing up in a school system with no formal art instruction. Fortunately, Wegner’s third-grade teacher was an artist and provided some guidance and later an English teacher with an art minor started an art club.

He drew on everything, including the figures from Disney’s “Bambi,” a hit movie from his youth, on his school desk.

“I would draw the figures on my desktop during the day and the janitors would scrub them off at night,” he recalled with a smile.

His work is in a number of private collections on the East and West coasts, in the Midwest, Canada and Europe. He has exhibited at the Walker Art Center, Minneapolis Art Institute, Duluth Tweed Gallery, Mason City Macnider Museum, Rochester Art Center and Naeve Hospital in Albert Lea.

“Come in and travel where I’ve been,” he said. “I’m thrilled to be asked to be here at Albert Lea.”

What: James Wegner’s “Have Brush, Will Travel” art exhibit