Irene M. Thisius, 88, of Wells died Saturday, April 18, 2015, at Hillcrest Care Center in Mankato.  Mass of Christian Burial will be at 11 a.m. Friday at St. Casimir Catholic Church in Wells. Visitation will be from 4 to 7 p.m. Thursday at Bruss-Heitner Funeral Home in Wells and will continue one hour prior to the service at the church on Friday. Interment will be at St. Casimir Cemetery in Wells. The Rev. Thomas Niehaus will officiate. Bruss-Heitner Funeral Home in Wells is in charge of arrangements. Please see www.brussheitner.com to leave online condolences. 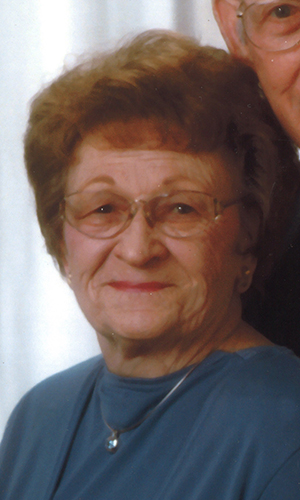 Irene was born June 10, 1926, in Wells, the daughter of John and Agnes (Kalis) Kulla. She attended school in Wells. Upon graduation, Irene attended college in Mankato and subsequently worked in Minneapolis.

Irene was united in marriage to Milton Thisius on May 27, 1947. The couple farmed for many years in rural Wells. She was a member of St. Casimir Catholic Church and the Wells American Legion Auxiliary.

She enjoyed golf, gardening, embroidery, crocheting and visiting with her grandchildren and great-grandchildren.

Preceding her in death were her husband, Milton; parents; brother, Raymond Kulla; and great-grandchildren Katie Kernan and Wyatt Girtler.