Kathleen “Kathy” Mary Goldman of Wells died Sunday, April 5, 2015, surrounded by her friends and family. A funeral service will be at 10:30 a.m. Monday at Good Shepherd Lutheran Church in Wells. The Rev. Laurie Stoeger will officiate. Visitation will be one hour prior to the service. Interment will follow at Rosehill Cemetery in Wells. Bruss-Heitner Funeral Home of Wells is in charge of arrangements. Please see www.brussheitner.com to leave online condolences. 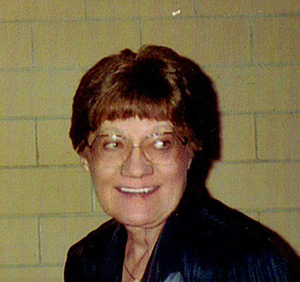 Kathy was born Feb. 6, 1950, the daughter of Carl and Marcella (Schultz) Bangs. She graduated from Wells-Easton High School in 1968. After high school she attended college in Albert Lea where she earned a degree in accounting. She married Horace “Monty” Goldman on Jan. 16, 1974, in Houston and from this marriage there were two sons. The couple later divorced.

Kathy enjoyed her time working as a clerk/cashier at Red Owl, SuperValu, Food N’ Fuel and Casey’s. She also enjoyed spending time with her grandchildren and meeting new people through Facebook games.

She is preceded in death by her parents, grandparents, aunts, uncles and cousins.