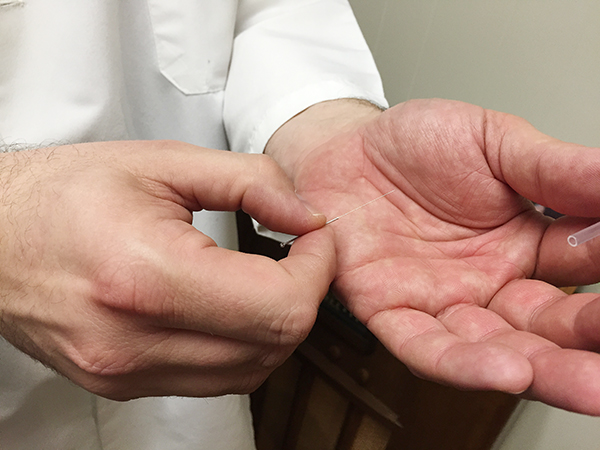 Christopher Shoff displays one of the needles he uses when he performs acupuncture on a patient. – Spenser Bickett/Albert Lea Tribune

Bad back pain can lead someone to try any and all kinds of possible treatments to alleviate it.

Pain killers, special chairs, beds, or shoes, the list goes on and on.

But temporarily becoming a pin cushion is an often overlooked solution that can show results.

Local chiropractor Chris Shoff has been offering acupuncture treatment at his practice since he joined it in 2002, and uses it to treat a wide variety of pain, including knee, hip, shoulder and back pain.

“It’s certainly a viable alternative to other forms of treatment,” Shoff said.

Shoff learned about acupuncture treatment during his time at chiropractic school on the advice of his father, Niles, who is also a chiropractor.

“He suggested that I take it just to have it, and take it while I was in school, rather than take it years later,” Shoff said. 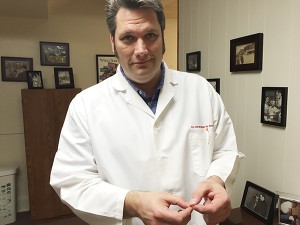 Christopher Shoff has been at his Albert Lea practice since 2002. – Spenser Bickett/Albert Lea Tribune

Shoff suggests acupuncture treatment to many of his patients, he said, and many are very receptive to it.

The process involves identifying the area of treatment, and inserting needles, which are left in for usually a total of 15 minutes, Shoff said. He stimulates the needles with his hand while they are in the patient, while other acupuncturists might attach electrodes to the needles for stimulation.

The biggest misconception about acupuncture comes from the size of the needles, Shoff said. Many people picture a large, hypodermic needles that might be used for drawing blood, while the actual needle is quite small.

“I always describe it as, because people in this area realize what this is,” Shoff said. “A mosquito bite without the itching.”

The amount of needles Shoff inserts depends on the condition, but he usually relies to “the rule of 10,” which he learned from the person who taught him acupuncture.

“The less needles, the better,” Shoff said. “But I’ve heard of others that will put more in.”

A lower back condition or persistent headaches usually require four to eight needles, Shoff said. But one specific case from his past only required one.

A patient with persistent hiccups came to his office in September 2011. The 75-year-old man had knee surgery a week earlier, and had hiccups ever since coming out of surgery.

He’d tried everything, including medication and other household remedies. Both the patient and his wife had become “really upset about the hiccups,” according to a paper Shoff wrote on the patient’s case.

Shoff inserted one needle to a specific location, and within six hours the hiccups were gone.

“We did one needle and adjusted him, and that was about 3:30 in the afternoon,” Shoff said. “And they went away about 10 o’clock that night, never to return.”