Lois Ann Christiansen, 87, of Hartland, died Monday, April 27, 2015, at Thorne Crest Retirement Community in Albert Lea. A memorial service will be at 11 a.m. Monday at United Methodist Church in Albert Lea. Visitation will be from 3 to 6 p.m. Sunday at United Methodist Church in Albert Lea, and will continue one hour prior to the service at the church on Monday. Due to Marvin being allergic to flowers, the family prefers memorials to Freeborn Cemetery or to the donor’s choice. Bruss-Heitner Funeral Home of Wells is in charge of arrangements. Please see www.brussheitner.com to leave online condolences. 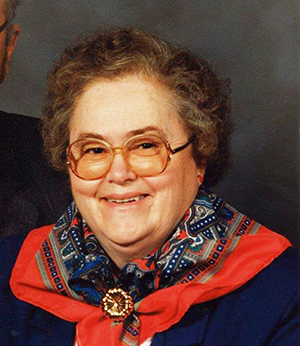 Lois was born Feb. 18, 1928, the daughter of Harvey and Josephine (Holland) Christensen in Freeborn County. On Oct. 8, 1946, she was united in marriage to Marvin Christiansen at Freeborn Congregational Church. Marvin and Lois farmed near Hartland their whole married life. Lois enjoyed playing cards at the Albert Lea and Alden senior centers and anywhere else there was a deck of cards lying around. She also enjoyed reading, crafts, crochet, sewing, gardening, canning and baking cakes and decorating them. In her younger days she enjoyed barnstorming with her brother, Lowell. Lois was active in her church as women’s president, delegate, task forces, and circle. She was also on district and conference committees and synod delegate. She was a member of United Methodist Church and she belonged to Gilmore-Stensrud Post No. 552 of Freeborn and served as president, secretary, treasurer and chaplain. Lois was also a legislative representative and went to Washington and attended local meetings and Day on the Hill. She contacted government people on issues, being very concerned on country problems of crime, healthcare, farm policy and morals. Lois loved her family very much and enjoyed spending time with them.

She was preceded in death by her parents and her brother, Lowell Christensen.