Love of flowers has grown into tradition for area communities 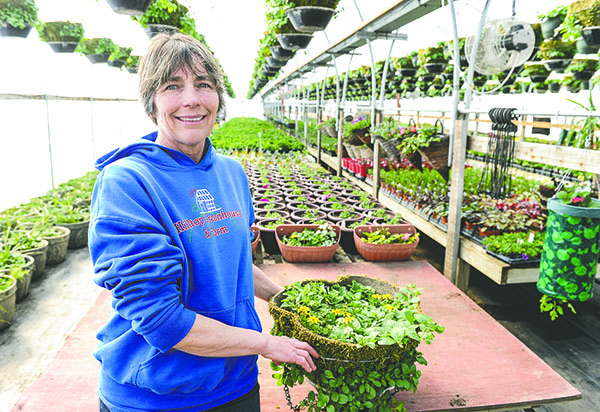 Gretchen Boldt, owner of Hilltop Greenhouse, is in charge of making Albert Lea and Austin’s flower baskets that decorate the downtown of each community. – Eric Johnson/Albert Lea Tribune

By Jason Schoonover and Hannah Dillon

In the next few weeks, downtown Albert Lea will be looking a lot brighter, thanks to an area gardening center. 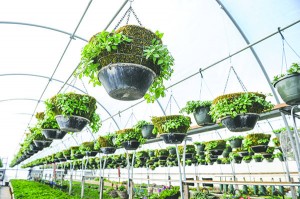 Hundreds of flower baskets hang in a greenhouse at Hilltop Greenhouse, waiting for the day they will be transported to Albert Lea and Austin to be displayed downtown. – Eric Johnson/Albert Lea Tribune

Hilltop Greenhouse in Ellendale is run by Gretchen Boldt. Boldt has worked on the hanging flower baskets and downtown flower pots since last year, she said. However, she has worked with Albert Lea Parks and Recreation since the early 1990s, supplying them with plant material for city gardens.

There are about 30 baskets for Albert Lea this year. Bidens, ostespermums and trailing petunias will be planted in the hanging baskets in bright shades of pink, purple, blue, white and yellow, Boldt said. They should be hung in mid-May, weather permitting, but Boldt said they will be up before Memorial Day at the latest.

The flower pots are scheduled to be planted on May 16 and feature similar flowers as the hanging baskets along with some decorative grasses to give them a focal point, as the pots are so tall.

While Boldt grows the plants for the flower pots, local Girl Scout troops help plant them during downtown cleanup.

“It was just a great day to see so many people out,” Boldt said about last year’s flower pot planting.

One new thing that is being offered this year are pots for individual downtown businesses. Boldt said the pots will be either red geraniums or mixed petunias. Not many businesses have signed up so far, she said, but in coming years she expects it to be a little more popular. 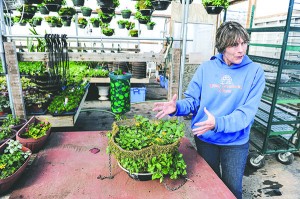 Gretchen Boldt explains how a hanging flower basket is assembled in one of Hilltop Greenhouse’s greenhouse. – Eric Johnson/Albert Lea Tribune

One business that will have individual flower pots is the Albert Lea Convention and Visitors Bureau. Boldt said people will have to look downtown for the rest.

Another new aspect will be the flowers planted in the four big flower pots that cap off the north end of Broadway near Fountain Lake Park. Boldt said these pots will have a geranium and petunia mix planted in them this year.

“Everything we grow here we start ourselves and grow out,” Boldt said. “We don’t like to do huge volume. We like to do a quality product.”

The baskets hanging and growing at Hilltop look relatively simple, but they’re made to keep the plants from drying out or from losing water. The baskets feature three main components: Moss mats are inserted in a wire mold that connects and funnels into a saucer.

Flowers are planted in the top of the mat and some are inserted into the sides of the matting to flower down. Back in the day, Boldt said the baskets probably utilized coco liners, which she argued allow too much airflow, and the baskets may dry out or heat too much. The moss liners, which can’t be seen once the flowers grow to a certain point, help hold water and give the plants something to root into.

A spacer is inserted at the bottom of each saucer so there’s a water reservoir at the bottom. It’s important for the baskets to hang straight or else the water will spill out.

The wire and saucers are all reused each year.

When planting, the Boldts utilize a factory system with everyone pitching in and each taking on a duty to make the baskets. Gretchen and Glenn have help at Hilltop from their daughter, Julie Otto, and her husband, Steve Otto. The Boldts’ other children, grandchildren and a neighbor girl also help out from time to time.

The work isn’t done after planting. Along with routine watering, the Boldts pinch the flowers to encourage the roots to spread and grow hardy. Boldt said she wants something that grows tight so it can withstand wind and rain without getting pulled apart in the summer.  They also watch the fertilizer, not wanting to overdo it, to make sure the plants form a good root system.

‘Part of the community’

Boldt is proud Hilltop is a vital part of the regional community. The Boldts opened Hilltop Greenhouse in 1989 and built 13 A-frame greenhouses. Yet they lost everything when a tornado destroyed the business and the family home on July 17, 2010.

Boldt was thankful for the community support after the tornado, and Hilltop has taken on a more community-based approach since.

“It’s really nice to be a part of the community,” Boldt said. “(At) our business, we’ve always wanted that.”

Since the tornado, the Boldts rebuilt their home on the property, along with 10 greenhouses, and a new retail store, but they discontinued wholesale services. The business now has more interactive programs, like planting parties and a veggie club. Planting parties are classes where people or groups come out to the store, plant their own baskets and let them grow at the greenhouses until May. For the veggie club, Hilltop grows fresh produce on its 20-acre farm to give veggie club members a box of produce each week. They Boldts also sell plants, vegetables and more at the store.

The family loves being part of the area towns, and Boldt loves being able to see the results of their hard work hanging downtown.

“It’s a beautiful project,” Boldt said. “The flowers do cause a little bit more calmness, more beauty of course, but I always think that greenery gives people a more relaxed feeling.”