Funeral services for Lucille Edith Pritchard of Albert Lea will be at 10:30 a.m. Tuesday at St. Theodore Catholic Church, Albert Lea. The Rev. Timothy T. Reker and Deacon Mike Ellis will officiate. Interment will be in St. Theodore Cemetery in Albert Lea. Visitation will be from 5 to 8 p.m. Monday at Bonnerup Funeral Service and one hour before the service at the church. 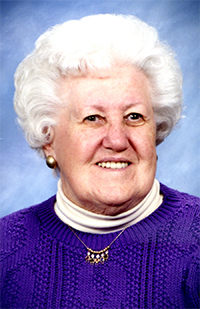 Lucille passed away peacefully Wednesday, April 8, 2015, at St. John’s Lutheran Community in Albert Lea. She was 89.

She married Donald L. Pritchard Aug. 28, 1944, at St. Theodore’s Catholic Rectory. They made their home in Albert Lea where they raised their children and resided all their lives.

Lucille loved to sew. She had many customers, in addition to quilting with the Ladies Church Sewing Group from St. Theodore’s. She also enjoyed reading, playing games and crafts.

She was preceded in death by her husband, Donald L. Pritchard; her parents Harrison and Eunice Claude; sisters Phyllis, Elizabeth and Teresa; brothers Paul and John Claude; and grandson, Keith Lee Pritchard Wood.