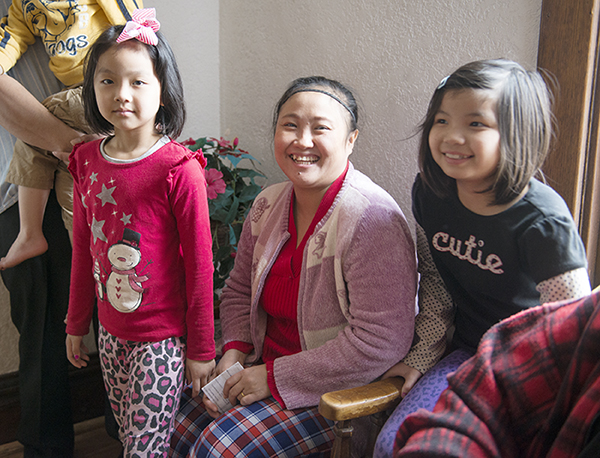 Kler Say sits in between her daughters Leah Say, left, and New New. Kler Say, a member of the local Karen community, will officially be a U.S. citizen after her naturalization ceremony Thursday. — Colleen Harrison/Albert Lea Tribune

For some time now, Kler Say has wanted to make the United States her home. On Thursday, it finally will be.

Kler Say, 34, is originally from Burma. She is one of an estimated 100 refugees from Burma who have moved to Albert Lea in the last 10 years. These refugees are known as the Karen, and they fled Burma and refugee camps in Thailand to come to the U.S. The Karen are an ethnic group from the mountainous border regions of Burma and Thailand who were subject to persecution and ethnic cleansing by the military-backed Burmese government, which calls the country the Republic of the Union of Myanmar.

New New and Lea Say both attend Lakeview Elementary School, where they’ve also learned English. Kler Say has learned some English through Adult Basic Education classes at Brookside Education Center and has learned from her daughters as well.

While Brookside does offer classes that help immigrants prepare for their citizenship tests, Kler Say did all of her studying and preparation on her own at home. Through some of her family’s translation, she said that she decided to take the test to become a citizen because she wants to live the rest of her life in the U.S. and make it her home.

Jennifer Sorlie, a citizenship class teacher at Brookside, said the U.S. citizenship test is broken up into three sections: civics, reading and writing. She said there are 100 questions that students have to study the answers to, as 10 of those questions will randomly be selected for them to answer when they take the official test, or interview. Six of the 10 questions must be answered correctly in order to pass that section. Sorlie said questions on the test range in time periods from the earliest settlers in the U.S. to the Sept. 11, 2001, terrorist attacks on the U.S. Students also have to know topics such as what the American flag is meant to represent, significant presidents and important women in the country’s history and the different branches of government, among other topics, according to Sorlie.

“There’s a whole gamut of information students have to study,” she said.

In describing the process of becoming a U.S. citizen, Sorlie said those interested first have to fill out a 21-page application for citizenship. There’s a $600 to $700 fee that goes along with the process, but there are some cases where applicants who are eligible can receive a fee waiver, she said. If the application is approved, the applicants then receive a letter that tells them both when they will have their interview and when they’ll need to get fingerprinted. After they’ve taken their test and had their interview, they will be told during that same appointment whether they’ve passed. If they’ve passed, they’ll receive another letter telling them when their naturalization ceremony will be. The naturalization ceremony is where they’ll swear an oath professing loyalty to the U.S., and it is also when they’ll officially become U.S. citizens.

Kler Say took her test March 13, which is when she also found out that she had earned her U.S. citizenship. Her husband is currently going through the application process of becoming a citizen, and some of their friends are either going through the same process or have become citizens already as well. Kler Say’s naturalization ceremony will be Thursday in Mankato. She said that after the ceremony she’ll be coming back to Albert Lea to work her new job at Select Foods, which she started this past Monday.

Kler Say said she learned everything she needed to know for the test by studying different textbooks at home. Her favorite part about studying the materials was learning about the country’s history.

“It doesn’t matter if they’re at home or in the classroom setting; they still have to have that drive and that determination to do that studying,” said Sorlie. “Anyone who wants it can do it.”