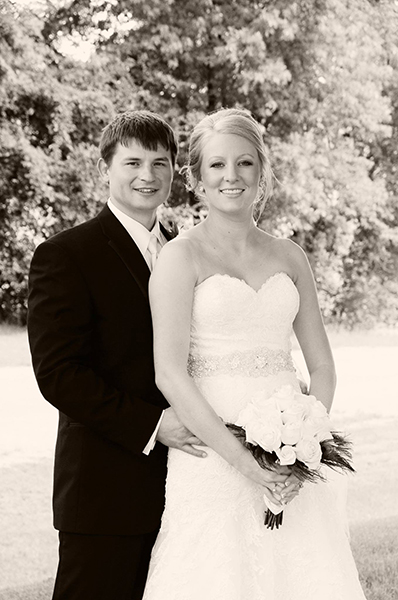 The bride is the daughter of David and Teresa Malakowsy of Minnesota Lake and the granddaughter of Harvey and Emily Malakowsky of Wells and Donald and Linda Bryson of Alden.

The bride is a 2010 graduate of Maple River High School and a 2013 graduate of Cosmetology Training Center. She is currently employed at Allure Salon and Spa.

The groom is a 2003 graduate of Alden-Conger High School and a 2006 graduate of South Central College in North Mankato, where he received an Associate Degree in agribusiness. He is currently employed at Wells Federal Bank.

Flowergirls were Nellie McCue of Minnesota Lake, daughter of Jason and Nancy McCue, friends of the bride, and Lillian Miller of Minneapolis, daughter of Lance and Stephanie Miller, cousin of the bride.

Ring bearer was Matthew Buss of Aurelia, Iowa, son of Jon and Kristina Buss, cousin of the groom.

Musicians included Ruthie Webster of Waldorf, friend of the bride, and Rebecca Bryson of Alden, aunt of the bride.