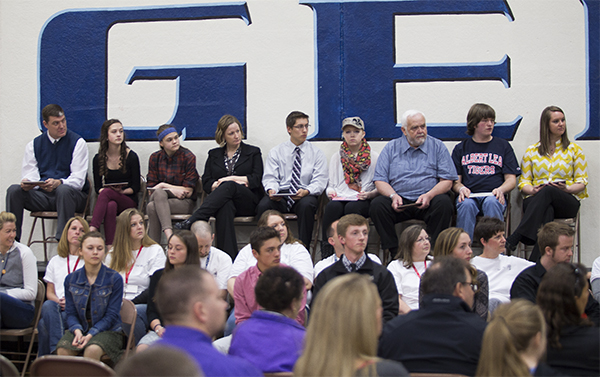 Nine students, staff and former staff at Albert Lea High School were inducted into the Wall of Inspiration on Friday. There are now 93 inductees on the Wall, which is in its 11th year.

The ceremony was attended by high school students as well as friends and family of the inductees. The 2015 inductees are Neil Chalmers, Karina Stripe, Chloe Stripe, Jenni Braaten, Tanner Bellrichard, Grace Andersen, Bob Hamberg, Darrek Wrolson and Lindsey Horejsi. Horejsi wasn’t able to attend the ceremony, so Activities Director Afton Wacholz accepted the award for her.

The Wall of Inspiration was created in 2004 by the Kuphal family in honor of Josh Kuphal, a 2002 Albert Lea High School graduate who passed away from spina bifida.

The Wall, which is located in the high school commons, isn’t a memorial, but was originally meant to honor those who inspired Josh Kuphal. The tradition continued and the Wall is full of students, staff and alumni who were nominated for being inspirational people.

Brian Kuphal, Josh Kuphal’s father, spoke at the ceremony and thanked everyone for their support.

“This is a special tribute to being humble and inspirational,” he said.

Chalmers is a media specialist and social studies teacher at Southwest Middle School. He is married to his wife, Aimee, and has two daughters, Grace and Abigail.

He has been teaching for 20 years and grew up in Willmar. Chalmers enjoys spending time with his family, working with kids, reading, watching sports and fishing.

Chalmers said he is inspired by his family, his students, the mock trial team and anyone who demonstrates love and a positive attitude.

Stripe, a junior at Albert Lea High School, is involved with the National Honor Society, Link Crew, yearbook and student council. Outside of school she has been a Sunday school leader, Hawthorne volunteer and a dancer at Just For Kix.

She enjoys spending time with kids, reading, painting and making memories with her friends and family.

Stripe said she is inspired by people who never give up, her mother and knowing she’s made someone’s day better.

After high school, Stripe plans on going to college for elementary education.

She enjoys sports, music and her dog. Stripe said she is inspired by people who go out of their way to help others, and she is proud of the fact she can make people laugh until they cry.

Braaten is a social worker at Albert Lea High School and the Area Learning Center. Her family includes her daughter, Ellie.

She grew up in Austin and has been a social worker for 17 years. Braaten enjoys horseback riding, reading, Hardanger embroidery and traveling to Mexico.

Bellrichard, a junior at Albert Lea High School, is involved with hockey, baseball, National Honor Society and Link Crew. Outside of school he is involved in Legion baseball and St. Theodore Catholic Church.

He enjoys watching sports, socializing and collecting sports memorabilia. Bellrichard also said he is proud of being a baseball coach’s award winner twice and for receiving academic letters in baseball and hockey.

His plans after high school involve attending a four-year college.

Andersen, a junior at Albert Lea High School, is involved with golf. Outside of school she works at the 112 on Broadway and participates in the Relay for Life.

She enjoys painting, crafts, golfing and spending time with friends and family. Andersen said she is inspired by people who find positives in negative situations.

One accomplishment Andersen shared was beating cancer; she was diagnosed with chronic myeloid leukemia on Dec. 6, 2013, and is now in remission.

After high school, Andersen plans on continuing her education.

Hamberg, who recently retired as the Albert Lea High School groundskeeper, worked for the district for 34 years. He has a wife, Susan, four children and 11 grandchildren.

Hamberg went to Glenville High School and his hobbies include collecting baseball memorabilia, having family time and being involved in his church.

He said he is inspired by his wife, his children, his grandchildren, his church family and people who help by volunteering.

Wrolson, a senior at Albert Lea High School, is involved with Tiger Vision and outside of school he works at St. John’s Lutheran Community.

His hobbies include camping and riding bike and Wrolson said he is inspired by his faith.

Wrolson said after high school he plans to go to Riverland Community College for welding, trucking or maintenance.

Horejsi, a junior at Albert Lea High School, is involved with swimming, track and field, Link Crew and the National Honor Society.

Outside of school she is involved with dance and weightlifting. She enjoys working out, watching movies and spending time with her family and friends.

Horejsi said she is inspired by competition and the kindness of others.

After high school, she plans on going to college and continuing to swim.