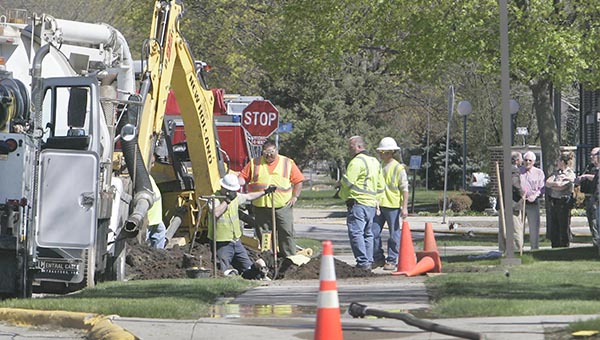 Crews from Alliant Energy work to repair a punctured natural gas line on the west side of the Worth County Courthouse in Northwood Wednesday morning. — Jeff Heinz/Mason City Globe Gazette

NORTHWOOD — A portion of Northwood was evacuated Wednesday morning after a construction crew installing fiber optics cable hit a natural gas pipeline near the Worth County Courthouse.

Businesses and residences within a five-block radius — including students at Northwood-Kensett Elementary School, the inmates at the Worth County Jail and the courthouse employees — were asked to leave as a safety precaution, according to a news release. The gas leak was on 10th Street, on the west side of the courthouse.

Northwood-Kensett Superintendent Michael Crozier said students at the elementary school were evacuated within 10 minutes. Students were taken by bus to the Northwood-Kensett High School where they waited in the gym.

“It was a very smooth evacuation,” Crozier said. “Everybody did their job and pitched in.”

The Worth County Sheriff’s Office was notified of the gas pipe leak at about 9:15 a.m., and by 11 a.m., Alliant Energy had arrived and advised that the leak was stopped and under control.

Worth County Sheriff’s Office Deputy Dennis Paulson said businesses and residents were notified either in person or by an automated message about the evacuation.

For many, it brought back memories of city-wide evacuation in February 2014 stemming from a chemical fire.