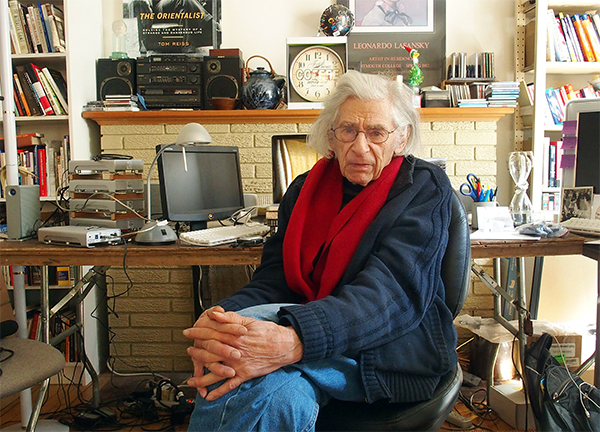 Al Milgrom sat at his editing desk in the front room of his home in Minneapolis on March 24. For decades, Milgrom has complained his work at the U Film Society and the Minneapolis St Paul International Film Festival was preventing him from finishing several films he has underway. Now having stepped back from film presentation he is finally completing documentaries he began in the 60s and 70s. He has two at this year’s MSPIFF. — Euan Kerr/MPR News

For more than 30 years, Al Milgrom ran the Minneapolis-St. Paul International Film Festival, putting directors and their artistic visions in the spotlight.

But this weekend Milgrom, who stepped down as director in 2010 will participate in the festival in a different capacity — as a filmmaker.

Four and a half decades after taking his camera into the Minneapolis streets, he has completed his long-awaited documentary “The Dinkytown Uprising.”

The film documents a student protest in April 1970, when the University of Minnesota campus was tense over President Richard Nixon’s escalation of the Vietnam War.

Milgrom confesses people who know him are surprised when he tells them he has finished the project — sometimes to the point of astonishment.

But he has. Admitting to “pushing 93,” Milgrom is a wiry energetic figure, with long gray hair. His glasses have gone in and out of fashion multiple times in his lifetime.

“The Dinkytown Uprising” captures weeks of protest sparked by a proposal for a new hamburger joint on the edge of campus.

“The word got out in the Minnesota Daily saying that there was a planned takeover of five businesses in Dinkytown and the Red Barn Chain was coming in,” Milgrom said.

Milgrom, who was then teaching film history at the U of M, sensed an opportunity and grabbed his 16-millimeter camera.

“This was an occasion for any budding filmmaker to go down and see what was going on,” he said.

Milgrom began filming around the demonstration, capturing the images of the student activists, including the young leftist firebrand David Pence.

“In the beginning God created the earth,” Pence barks into a bullhorn in the film. “And he gave all the land to God’s children. And then some rich folks came by and took it away from us and we are coming to get it back.”

The crowd roared its approval.

“Dave Pence who was already a community organizer,” Milgrom said. “And as you see in the film he says, ‘We can’t do it by legal ways. We gotta have direct action.’”

The students occupied the buildings for 40 days. Although some people today might find it extreme to have such a fight over a burger bar, the protest began the same week as the Kent State shootings, and the U.S. military’s bombing campaign Cambodia.

The film is filled with young idealists — people who went on to become well known. Among those on screen is Allan Spear, a fire-breathing young professor who would become a prominent state legislator. Famed choreographer Loyce Houlton was involved. Mike Gelfand, then-editor of the Minnesota Daily, and rookie reporter Nick Coleman both went on to larger media careers. Pence’s sister, Ellen, went on to create the internationally acclaimed Duluth Domestic Abuse project.

In a way they won. The new Red Barn was never built.

But what about the 20 hours of film Al Milgrom shot at the protest?

“They were basically in film cans sitting in my basement till about the mid-1980s,” said Milgrom. “And I kept looking at it and said, ‘Gee, I better do something with this.”

He worked on the film on and off over the years, filming more interviews, and editing it in recent months.

A big task was identifying some of the people in the film and tracking them down to see what had happened to them.

“I had to hire a private eye to find out where some of them were,” Milgrom said.

The result, Milgrom said, is a portrait of a generation. He has high hopes for the film, which includes the Bob Dylan song “Dear Landlord,” which the singer allowed him to use.

Two scheduled screenings at film festival already are sold out. More will be added.

For Milgrom, “The Dinkytown Uprising,” could be the start of something. There are more cans of films in his basement.