Funeral services for Ronald Walk Jr. will be at 10:30 a.m. Wednesday at Grace Lutheran Church, Albert Lea. The Rev. Janet White will officiate. Visitation will be from 4 to 8 p.m. on Tuesday at Bonnerup Funeral Service, Albert Lea and again one hour prior to the service at the church. 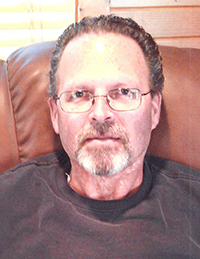 Interment will take place in the Geneva Cemetery.

Ronald passed away at his home surrounded by family on Friday, April 3, 2015. He was 52 years old.

Ronald was born on Nov. 26, 1962, in Long Beach, California, to Ronald L. Walk Sr. and Alice L. Lombard (Frost). He grew up in Manly, living with his mother and stepfather Victor Frost.  He graduated from Manly High School.

Ron worked at Streater in Albert Lea for 21 years, as well as various other jobs including his latest job at Truth Hardware in Owatonna. He also worked at Red Carpet Car Wash, where he met his wife to be, Dawn (Rezac).

In 1986, Ron and Dawn were married, and they started a family in Albert Lea. He enjoyed camping with his family, going to his boys’ games and watching them bowl. He was a member at both the Eagles and Moose and was looking forward to going to his grandchildren’s activities. He also enjoyed fishing, watching racing, especially cheering for Dale Jr., and enjoyed boating with family, friends and his dogs Lady, Joe and Annabell. He was a coach for all of the kids’ bowling teams. He himself bowled a 300 along with both of his two sons. His most precious time was at the camper because that was always his and Dawn’s time together.

He is preceded in death by his parents, Alice and Victor Frost and Ron and Sheila Walk Sr.; in-laws Larry and Kay Rezac; grandparents Myrtle Frost, Mildred and Orville Hartwell and Ruth Walk; and a sister, Daphne Walk.