Ruth Lyons passed away Saturday, April 4, 2015, at her home in Orland Park, Illinois. Funeral services were at 10:30 a.m. April 11 at Ashburn Baptist Church in Orland Park. 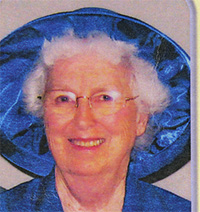 Ruth was born Nov. 20, 1928, in Cherry Grove to William and Esther (Sydow) Scrabeck. They later moved to Kiester where she graduated from Kiester High School. She attended college in Oskaloosa, Iowa.

In 1950 Ruth was united in marriage to Vernon Lyons. She spent many years as a Sunday school teacher and vacation Bible school teacher.

She is preceded in death by her parents; daughter, Jane; sister, Esther; two brothers-in-law; and one sister-in-law.