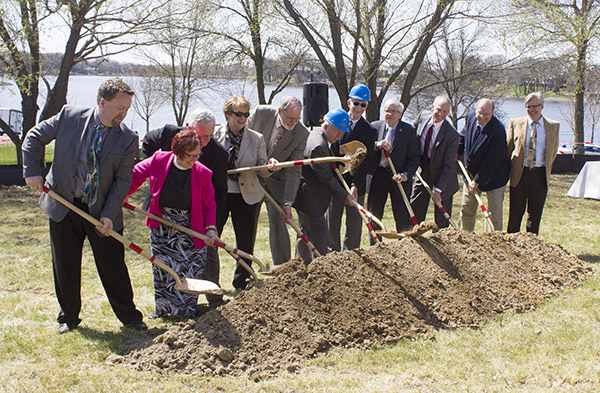 St. John’s Lutheran Community board members dig in a mound of dirt Thursday morning during the groundbreaking of the new St. John’s on Fountain Lake. – Sarah Stultz/Albert Lea Tribune

First phase of project to be completed next spring

Administrator Scot Spates said the new facility raises standards for senior care that will meet the needs, wants and expectations of the people they will serve.

In front of at least 100 people at the ceremony, Spates shared the stories of four residents he has learned lessons from over the years. One of those residents recalled his days bailing hay and picking rocks. He told Spates he missed his parents.

Another woman in her 80s, who was confined to a wheelchair, approached him about how she could raise money for victims of Hurricane Katrina. The third resident had helped liberate prisoners at the Mauthausen concentration camp, and the fourth resident was honored in Albert Lea’s Third of July Parade. 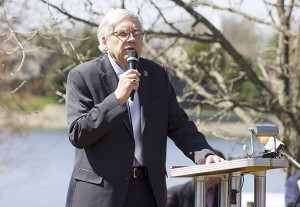 He said there were five key milestones with the project.

It all began in 2009 when the board of directors began looking at the organization’s strategic plan, he said. He noted at that time he had no idea that a new multi-million facility was going to be the answer.

In August 2010 the board voted to purchase 51 acres of property — known to many Albert Leans as “the back nine” — from American Bank of St. Paul. The land had been in the hands of the bank after it was surrendered by commercial developer Scott LaFavre following the property’s foreclosure.

In August 2011, St. John’s hired its architectural firm for the project, and in April 2013, they received permission from the Minnesota Department of Health to move beds from the existing facility to the new location.

In July 2014, they received notification from the U.S Department of Agriculture that they would help fund the project, and on March 31 the footings started to be poured.

The first phase, which is slated to be completed by April 2016, will include an assisted-living complex and independent-living complex, joined by part of the town center. The town center will offer services including an activity room and chapel, a barber and beauty shop, a coffee shop, a technology center and a fitness center, to name a few.

The assisted-living building will include 16 apartments on the first and second floors, with the 16 on the first floor for memory care patients.

The second phase will include the nursing home, with 84 private resident rooms, which is slated to be completed in March or April 2017.

Gayle Kvenvold, president of Leading Age Minnesota, who is from the Albert Lea area, said she was proud of the project. She said the church she grew up in was one of the founding members of St. John’s Lutheran Community.

She congratulated the St. John’s staff and board for their vision in meeting the need for more senior housing.

She said by 2020 Minnesota will have more seniors than school-age children.

Colleen Landkamer, the state director of USDA Rural Development, commended the community for working diligently to figure out financing for the project.

“It takes a community to take care of their seniors and that’s what this is about,” Landkamer said.