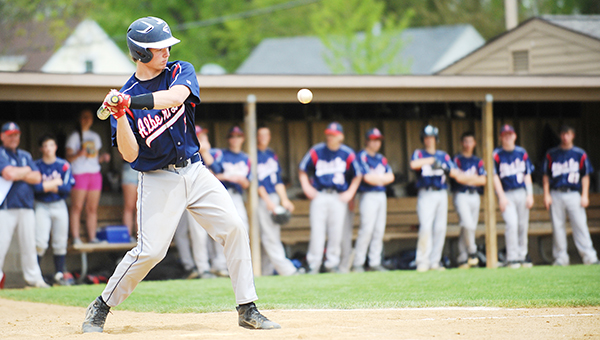 Chris Enderson of Albert Lea watches a pitch on May 24, 2014, during the Tigers’ first postseason game last year against Waseca. Enderson is one of six returning seniors on Albert Lea’s roster. — Micah Bader/Albert Lea Tribune

To compensate for the graduation of the Tribune’s 2014 All-Area baseball Player of the Year, Albert Lea returns everyone else. 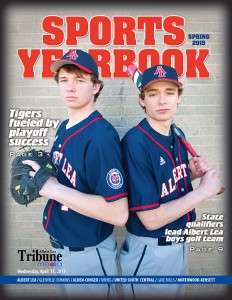 Want to read more? See this and other stories in the spring issue of Sports Yearbook, set to be released Wednesday. — Colleen Harrison/Albert Lea Tribune

“We lost a big leader in Henry (Johnathan Fleek), but we’ve got to get together and make up for it and improve throughout the season,” said junior shortstop Jake Thompson.

Growth throughout the season was last year’s blueprint. The Tigers lost 10 straight games before a 17-0 win over NRHEG in the regular-season finale and four postseason wins that qualified Albert Lea for the Section 2AA championship against Glencoe-Silver Lake, a team that finished third at the state tournament.

“We picked up some great playoff experience last year in reaching the section finals,” said Tigers coach Joe Sczublewski in his 26th year as head coach at Albert Lea. “We should have a pretty balanced hitting attack and solid defense.”

Although the entire team aside from Fleek returns, the lineup isn’t set in stone.

“There will be a lot of competition for available spots,” Sczublewski said. “We have quite a few returnees and some talented younger players who will challenge for spots.”

At the plate, Albert Lea returns Big Nine All-Conference honorable mention and First Team All-Area selection Wyatt Paulsen, who was second in the area — behind only Fleek — with 25 hits and fifth in the area with a batting average of .368.

Parker Mullenbach, a First Team All-Area selection, returns as one of three players on the Tigers’ roster and four players in the area who posted 20-or-more hits last season. After hitting .282 last spring, Mullenbach’s numbers improved with the Albert Lea Legion Post 56 team in the summer when he tied Makael Lunning, a two-time All-Area baseball Player of the Year, with a team-high 25 hits. 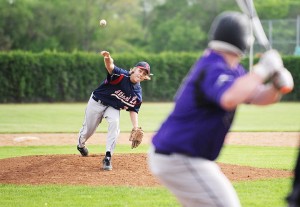 Senior Tyler Steele and junior Sam Moyer are also listed as pitchers. Steele struggled last spring with an 0-2 record through nine innings but showed improvement last summer in Legion ball with a 4-2 record and 5.79 ERA through 32 2/3 innings.

“Our biggest question marks are finding some pitchers who can be consistent to replace Fleek,” Sczublewski said. “We need to hold walks to a minimum. If pitchers are throwing strikes, I think our defense can be solid.”

At catcher, Albert Lea returns Enderson, Moyer and Boyum, who is also listed as a third baseman.

Around the infield, Mullenbach returns at first base, E.J. Thomas at second and Thompson, an All-Conference honorable mention and Second Team All-Area selection, is listed at shortstop and third base. When Fleek, the starting shortstop, pitched last year, Thompson filled in and allowed Fleek to go 5-2 on the mound, the best record in the area.

Fleek is one of two former Tigers who will compete at the college level this season. He will take the field at Ellsworth Community College in Iowa. Aaron Klatt, a fourth-year right-hander, will pitch for South Dakota State.

Albert Lea has the highest enrollment in Section 2AA, and after qualifying for the section finals last season, Sczublewski listed the Tigers as section favorites along with Holy Family Catholic, Belle Plaine, Glencoe-Silver Lake and St. Peter.

“Section 2AA is pretty wide open,” he said. “It all comes down to who has solid pitching and defense and which team improves the most throughout the season.”

This spring will be the last season the Tigers will compete in Section 2AA. The Minnesota State High School League announced on March 7 it will move from three to four classes for baseball and softball for the 2015-16 and 2016-17 seasons. Albert Lea will move to Section 1AAA, and the Tigers will have the fourth-largest enrollment out of eight teams.