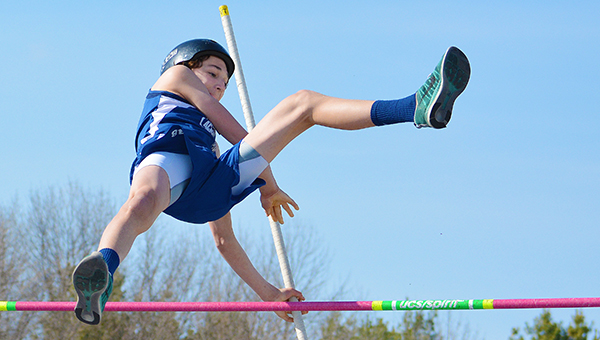 First-place finishes in 14 events spurred the Albert Lea boys’ track and field team to its first dual victory of the season.

The Tigers produced four competitors who won each event they entered during an 81.5-64.5 win at Kasson-Mantorville.

“It was exciting for the kids,” said Albert Lea coach Kevin Gentz. “We haven’t really run a complete meet yet, but tonight we were closer to doing that.”

Senior Matt Nemec led the Tigers by winning both in throwing events. His toss of 134 feet, 10 inches was 17-4 further than the second-place finisher, Chase O’Connor of Kasson-Mantorville. Nemec also took gold in the shot put with a throw of 41-2.

Juniors Colton Mowers, Jackson Goodell and Will Kozelsky won all of their events.

“Colton posted his best time in the 200,” Gentz said. “He’s been sick all week but was still able to perform well.”

“Jackson and Will had an exceptional meet,” Gentz said. 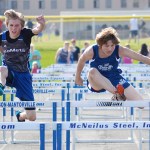 Spencer Indrelie of Albert Lea, right, leaps over a hurdle Friday at Kasson-Mantorville. Indrelie took fifth place in the 100-meter hurdles and fourth in the 300 hurdles. — Lon Nelson/For the Albert Lea Tribune 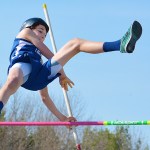 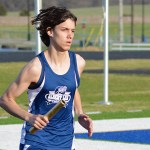 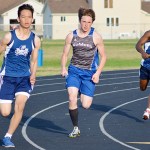 Htee Wah Shee of Albert Lea runs in an outside lane as his teammate, Joe Peterson, runs in the inside lane during the 4×400-meter relay Friday at Kasson-Mantorville. — Lon Nelson/For the Albert Lea Tribune 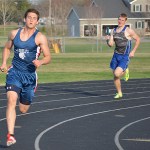 Will Kozelsky of Albert Lea runs a leg of the 4×400-meter relay Friday at Kasson-Mantorville. The team of Kozelsky, Joe Peterson, Jackson Goodell and Colton Mowers won the event with a time of 3:43.68. — Lon Nelson/For the Albert Lea Tribune