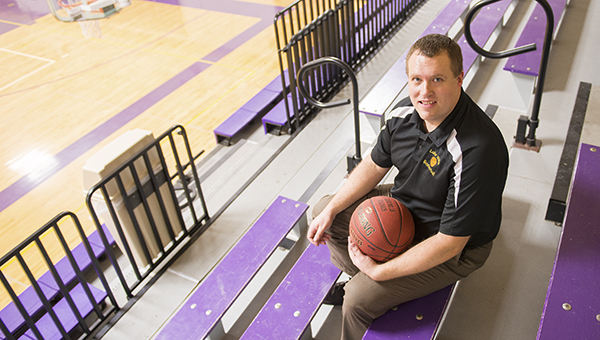 LAKE MILLS — A school-record 20 wins was a reflection of how Kyle Menke utilized the skill and leadership of his players and put Lake Mills in a position to succeed.

In his 16th season leading the Bulldogs, Menke is the Tribune’s All-Area boys’ basketball Coach of the Year.

Lake Mills entered the season after graduating most of its offensive firepower. The Bulldogs lost Hunter Kingland, the team’s leading scorer at 15.4 points per game, along with four of its top six scorers.

However, instead of taking a step backward, this year’s team was more efficient from the field, beyond the arc and at the free-throw line.

Peters was third in the Tribune’s seven-team coverage area in scoring, and he was second in assists with an average of 6.4 per game. His 153 total assists were 66 more than the Bulldogs’ leader last year.

Lake Mills began the season with a pair of wins, including a 66-60 home victory over Forest City, a Class 2A state qualifier.

A: We have many dedicated kids in our program who are willing to put in time during the offseason. I think that has been the most important factor in our success throughout the years. We had a rough year in 2012, and our players have worked extremely hard throughout the past few seasons to get our program back to a high level.

Q: The Bulldogs had two of the top three assist producers in the Tribune’s seven-team coverage area: Josh Peters and Cody Haugo. How much did unselfish play factor into the success you had this year?

A: Unselfishness is critical to our program’s success, and we talk about it all the time. Our guys know the importance of putting the team first and playing their roles. Our team this season did an exceptional job of sharing the ball, making the extra pass, and taking the right shots.

Q: With Granger Kingland as the only player in Iowa — all classes — to make more than 60 3-pointers at a rate of better than 50 percent, was waiting for the best shot and not forcing shots something you focused on?

A: Shot selection is always important. Granger is an outstanding shooter, and he was so efficient this season. He can get his 3-pointers off quickly, but he doesn’t force anything. I was so impressed by his improvement this year, and he deserved all the post-season honors that came his way.

Q: What was one of the season’s highlights that you’ll remember for years to come?

A: The 12-game winning streak in January and February was a lot of fun. Beating North Central Conference champion Clear Lake in the district tournament was a great way to finish the year. Overall, it was just an enjoyable season from start to finish.

Q: What sets this group apart from other teams you’ve coached at Lake Mills?

A: This was the best shooting team I’ve coached. We had three kids (Granger Kingland, Josh Peters, and Charlie Dugger) who were excellent 3-point shooters. Statistically, we were the best perimeter shooting team in the entire state. We were a tough matchup for opponents because of our ability to stretch the floor and knock down open shots.

Q: With five guards on the floor at times, how was the small lineup able to contend against teams with more size?

A: Offensively, we just tried to play to our strengths. We created a lot of open shots through dribble penetration and floor spacing. I thought this team executed our half-court offenses as well as any group I’ve coached. Defensively, we focused on being in the right spots, giving help, and competing on the boards. Defense was where our lack of size hurt the most.

A: I was the JV baseball coach at Lake Mills for nine years, and I have also been the assistant track coach.

Q: What high school did you attend? Did you play sports, and which year did you graduate?

A: I graduated from South O’Brien High School in Paullina, Iowa, in 1995. I was very active in sports throughout my high school career.

A: I played two years of college basketball at Northwestern College in Orange City, Iowa. I graduated from Northwestern in 1999.

A: Coaching is one of those professions where you truly have to be yourself. If you try to act or coach like someone else, you won’t be able to get the most out of your team. The coach I admire the most is Mike Krzyzewski of Duke.

Q: What are your plans for the offseason?

A: We will continue offering opportunities for our returning players to improve. We will participate in a summer league and a couple team camps. We have many young players coming up in our program that have outstanding potential.

A: We want to build on the success that we had this year. Our biggest challenge will be trying to replace Josh Peters at the point guard position. His skills, leadership, and toughness will be hard to replace. With that said, we will bring back two of our top three scorers, and there are many young men in our program who are excited to increase their roles next season. As a program, we need to continue setting our goals high.