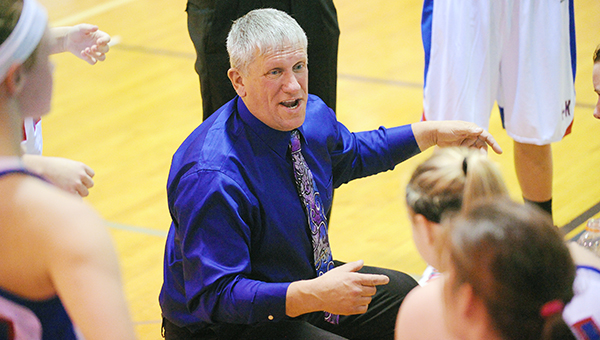 Multiple milestones were passed by the Northwood-Kensett girls’ basketball team this season.

Love is the Tribune’s All-Area girls’ basketball Coach of the Year.

Not only have the Vikings posted 12-or-more wins the last three seasons, Love changed the culture of the program.

When Love took the helm 13 years ago, the team had never produced a winning record in 5-on-5 basketball. Through his first 109 games, the Vikings lost 104.

In an effort to be more competitive, Love implemented a weight-lifting program and began speed and agility workouts. Since going 5-104, the Vikings have gone 82-74.

Although Northwood-Kensett — a team that competes in Class 1A — finished the season with a 19-5 record, the team only had two losses in its class.

The Vikings started the season with a home loss against Hampton-Dumont, a team that finished the regular season ranked No. 8 in the Class 3A polls. Northwood-Kensett rebounded by winning 14 of its next 15 games.

The Corn Bowl Conference has eight teams, and the Vikings swept Central Springs, Nashua-Plainfield, St. Ansgar, Riceville and North Butler. Northwood-Kensett split with Rockford and lost a pair of 1-point games against West Fork, a team in Class 2A.

In the postseason, the Vikings were 2-1. The team beat Newman Catholic 66-34 in the first round and avenged a loss against Rockford two weeks earlier with a 59-55 win in the Region 3 quarterfinals before a 52-32 loss at Turkey Valley in the semifinals.

Q: With an average of 58 points per game, your team led the Corn Bowl Conference in scoring. What led to the consistency?

A: Having a deep bench, we were able to consistently play ten girls to stay fresh and play a more up-tempo style of game than in the past. Our goal was to make everyone a shooting threat, get off more shots per game, and cut way back on turnovers to get more scoring opportunities. These young ladies bought into the system and focused on those goals to achieve that success.

Q: Hattie Davidson was the most prolific scorer in the Tribune’s coverage area with an average of 20.2 points per game. What were the factors that helped you decide to move her from the post to the perimeter this year?

A: Hattie worked hard on improving her game over the summer with ball-handling drills and adding an outside shot. I felt we had the depth at the post to move her outside to get her more touches every game. It gave her more flexibility to use her skill set and creativity in scoring. It also helped to combat a lot of the junk defenses teams would throw at us to try and stop her. Hattie was just as content in drawing the defense to her and giving up the ball on an assist as she was scoring.

Q: How important has it been for everyone to accept their roles and find ways to contribute?

A: Part of getting the girls to buy in was to show them that each girl has skills that they are better at than others. We asked them to give maximum effort in those areas while continuing to improve on their weaknesses. Everyone was told they must shoot if they were open to keep the defense honest. By accepting these roles, we could adjust to use whatever and whomever was working best on any given night. You never knew who would step up, and the girls didn’t care. They just wanted to win.

Q: Half of the top six assist producers in the conference were Vikings. Was passing and making good decisions with the ball a focus for you in practice?

A: Yes. We worked on always pushing the pace in practice to get used playing at that speed. We focused on better passing angles and working with different people to get used to each others tendencies and everyone scoring. One of the girls’ team goals was to finish in the bottom of the conference in turnovers.

Q: What was one of the season’s highlights that you’ll remember for years to come?

A: The night that Hattie scored her 1,000th point and I was able to get my 100th win and share the limelight was special. To see how far this program has come over the years and what these girls can accomplish is something I’ll never forget.

Q: What sets this group apart from other teams you’ve coached at Northwood-Kensett?

A: Their understanding of our game planning has been exceptional. I call our offense “street ball” with a few basic rules, and

we have made major changes in our defensive strategy from one night to another with only a walk through, and these ladies have worked it to near perfection.

Q: Why did you get into coaching?

A: That’s easy. The kids! I think we have some of the best student-athletes around, and I’m fortunate to have been given the opportunity to work with them. I felt I could help teach them the basics of the game and some life lessons along the way. I hope that I have in some way positively impacted their lives as much as they have touched mine.

A: I’ve been a varsity assistant football coach for 22 years, a baseball and softball assistant in the past, and I’m in my second year as head softball coach.

Q: What high school did you attend? Did you play sports, and which year did you graduate?

A: Meservey-Thornton High in Thornton, Iowa. It is now part of the West Fork High School in Sheffield, Iowa. I played football, basketball, baseball and ran track, graduating in 1976.

A: I never attended. I started working to earn money for college and just kept working.

A: Not any one coach. I try to glean something from every coach I come in contact with. I like how Mike Krzyzewski expects his players to perfect fine details and how our football coach Dave Capitani sees the value in lesser players and is able to get the most out of them.

Q: What are your plans for the offseason?

A: We will attend a couple of team camps and meet regularly to continue honing their skills.

Q: What are your goals for next season?

A: I know the girls will set tough but reachable goals for themselves again next season, and with nine returning letter-winners the expectations will great. Our focus was mostly on the offensive side this past year, and while we will continue to focus on the finer details of the offense and further lessen turnovers, my goal will be to work more on pressure defense.