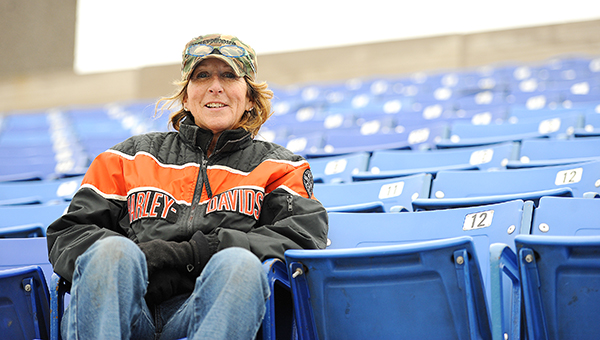 WELLS — The opportunity to sit on a piece of Minnesota sports history is less than a month away if United South Central accomplishes its goal.

Installation of the former Metrodome seats has a target date of May 21, the day the Rebels are scheduled to host the Subsection 5A track meet. 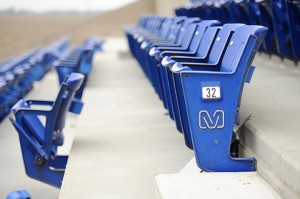 Some seats have been installed at the United South Central stadium, but installation of the 840 seats hasn’t been completed. — Micah Bader/Albert Lea Tribune

“It’s a long shot, but we’re really hoping to host subsections,” said USC athletic director Sue Summer on Saturday. “It’s a really cool thing to be using the Metrodome seats, and the facility itself is beautiful. Some colleges don’t have this nice of a stadium. Once its done, it’s going to be great.”

The size of the seats is not uniform and depended on which area of the Metrodome they were taken from, which has made installation challenging, Summer said.

The idea to buy the 840 seats at $40 each was spearheaded by Jon Feist and Mike Schrader, Summer said. Swehla Trucking and other volunteers hauled the chairs from Minneapolis to Wells and stored them at multiple locations for the winter, including Herman Manufacturing and the Wells city garage.

“There’s so many people in the community coming together to get this done,” Summer said. “That just makes it that much more awesome.”

“If they wouldn’t be part of Wells, we wouldn’t have this,” she said. “They kicked in a whole pile of money to make this beautiful.”

Although the stadium has not been completed, the Rebels hosted their first track meet at the new facility on April 17 for the USC Invitational against NRHEG, Martin County West, Blue Earth and Lake Crystal-Wellcome Memorial.

About a third of the seats were installed, but Summer said fans weren’t allowed to sit in stadium seating because of safety concerns. USC is waiting on production and delivery of handrails, so spectators stood by the fence at the base of the stadium, brought their own seating or sat on bleachers hauled over from the tennis courts.

“It was great to get on the new track,” he said. “There have been a number of volunteers and parents who have given up their Saturdays to help get it ready for competition.”

Since the press box is not finished, the Rebels’ updated timing system was used from a pop-up canopy on the sideline of the football field, Summer said.

Viesselman credited Dale Stevermer with getting the timing system running.

Along with the stadium, work is being done to new baseball, softball and football fields, which are irrigated with water from a lake next to the school. The baseball and softball are slated to be used for the 2015-16 season, while the football field will not be used until the 2016-17 season to allow grass to become established.