MANKATO — To Liz Ratcliff, climate change is the most important issue affecting the United States, and the world.

“None of the other issues matter if we don’t have a healthy place to live,” the Mankato environmental activist said. 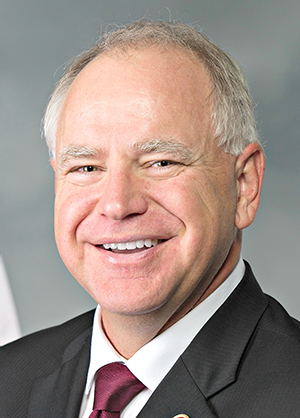 So when Democratic Rep. Tim Walz voted in February to approve the Keystone XL Pipeline project, Ratcliff didn’t see it as a minor area of disagreement.

Instead, she saw the vote as a potentially world-changing decision, one that could potentially tip the scales in favor of catastrophic global warming.

Ratcliff, who volunteered for Walz’s previous campaigns, isn’t the only supporter to be disappointed.

Dan Conner of North Mankato also speaks about the issue in such apocalyptic language that it’s obvious why Walz’s vote was critical to him.

“This crisis dwarfs world wars (but) people are so blasé about it,” he said. “I don’t think they understand.”

Conner said that while Walz typically explains his votes well — “usually what you see is what you get” — he has not heard a good reason to justify the vote.

Leigh Pomeroy, board member of the Mankato Area Environmentalists, said the Keystone XL Pipeline would enrich a few and create misery for many others. Meanwhile, scientists say Minnesota’s climate will start to look more like Kansas’, he said.

About two weeks ago, a group including Conner and Ratcliff spoke to a member of Walz’s staff, Conner said.

This isn’t to say that these disenchanted Democrats will flock to Republicans.

Ratcliff said she’s “definitely not going to vote for the other party. That’s only going to hasten our demise.”

She, and others, though, might lose some motivation to campaign or donate money. They may also gravitate to more left-leaning third parties.

Congress passed a bill approving construction of the pipeline earlier this year, but President Barack Obama vetoed it and the Senate failed to muster a two-thirds vote to override him. The issue is not dead, though; the president has said he vetoed the bill because it would have removed his authority to make a final decision on the project.

“If you can move things through pipelines in a safer manner, you should do so,” he said.

On the issue of carbon pollution, Walz doesn’t see the Keystone pipeline as the “final battle.”

The country has 175,000 miles of crude oil pipelines, to which the Keystone project would add 1,179 miles, he said.

“We’ve spent the last two years arguing about one pipeline,” he said.

Walz also noted the pipeline followed environmental procedures, and when a move was made to strip away an environmental study, he opposed it.

“My take on Keystone was that it followed procedures,” he said. “I voted against derailing those safety procedures.”

Walz said he’s a big believer in the need to move to sustainable energy, but “you need a bridge to get there.”

He calls himself “more committed than ever” to encourage renewable fuels.

This has admittedly not satisfied his critics on the left, some of whom “believed I was 100 percent supportive” of the pipeline, he said.

To Ratcliff and others, the tar sands that the pipeline is designed to tap are simply too big a source of carbon to put in the atmosphere.

The federal government’s review of the pipeline found that it wouldn’t have a “significant impact” on greenhouse gas emissions. This is mostly because the tar sands would probably be exploited anyways, pipeline or no.

But environmental advocates like Ratcliff say the pipeline would simply make the process cheaper, and therefore faster.

The big picture, she said, is that the world has a “budget” of carbon that it can remove from the Earth and avoid the worst effects of climate change. The carbon that’s now locked in tar sands and similar deposits worldwide exceeds that budget by a factor of five. In other words, this is just the type of carbon that needs to stay underground, in the perspective of Ratcliff and others.

Ratcliff is organizing a screening of the 2013 climate change documentary “Do the Math” on April 23 from 5 p.m. to 6 p.m. at Minnesota State University’s Ostrander Auditorium.