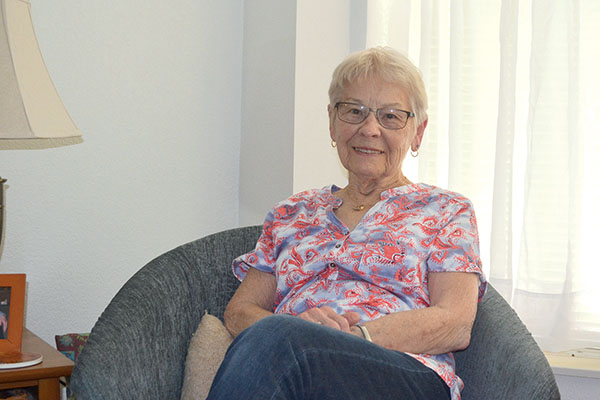 Isabel Ollman turned 90 years old on Monday and will celebrate by jumping from an airplane while skydiving Saturday. – Jenae Hackensmith/Albert Lea Tribune

AUSTIN — Isabel Ollman plans to celebrate her 90th birthday by jumping out of an airplane Saturday.

The Austin resident turned 90 Monday and decided to do something she had never done and always wanted to: go skydiving.

“It was just another adventure to look forward to and I’ve always wanted to do it,” she said. “So I’m going to do it.”

The jump is scheduled to take place around 10:30 a.m. at the Waseca Municipal Airport, weather permitting. Isabel Ollman isn’t going alone though. Two of her grandchildren are also jumping — Katherine Ollman, 23, and Zach Ollman, 38.

Isabel Ollman was inspired by former President George H.W. Bush, who went skydiving to celebrate his 90 birthday last June. She thought, if he could do it, so could she. But it is an adventure she always wanted to take.

“It just seems like it would be nice to float in the air without any wings or anything and feel the air rushing around,” Isabel said.

Isabel Ollman’s son, Jeff Ollman, said his mother is in good shape and in good health, so he is excited for her.

“She’s in great shape, she walks all over town,” he said. “Good health, really with it. We had no qualms about her doing it.”

Isabel Ollman stays busy. Along with walking, she enjoys volunteering at the Mower County Senior Citizen Center, playing cards, being on a bowling league from September to March and working out with some weight-lifting.

“And at a good pace. She can out-walk me,” Jeff Ollman laughed.

Looking ahead to the jump, Isabel Ollman is excited, but also nervous. The jump will be in tandem with an instructor, and Isabel Ollman will have a Go-Pro camera attached to capture her adventure.

“There will definitely be somebody there to look over all of us,” she said.

Isabel Ollman has lived in the Austin area since 1947. She said her family was shocked when she first told them her goal, but they accepted the idea and are now all for it.

“This totally hit me out of left field,” Jeff Ollman said. “She said she’s always wanted to skydive and she mentioned it last year.

As Jeff Ollman got more used to the idea, it surprised him less that his mother would want to do this. She has always been active and ready for a challenge.

“She’s ready, willing and able to do just about anything,” he said.

Isabel Ollman hopes this trip will not only be an adventure but also help her in other areas.

“To conquer some fears,” she said. “To learn to appreciate the earth.”

She said she isn’t usually afraid of heights, but this is a bit different.

“Normally I’m not, but just jumping out of an airplane sounds kind of scary, doesn’t it?” Isabel Ollman said. “That’s one of the things I want to conquer. But as far as the height is concerned I don’t think it will bother me so much.”

Many of Isabel Ollman’s family and friends will be there to support her and see her float through the sky. They will celebrate her birthday with a party Sunday. Jeff Ollman hopes the adventure is everything his mom is looking for.

“It’s not every day that you see a 90-year-old skydive,” he laughed.