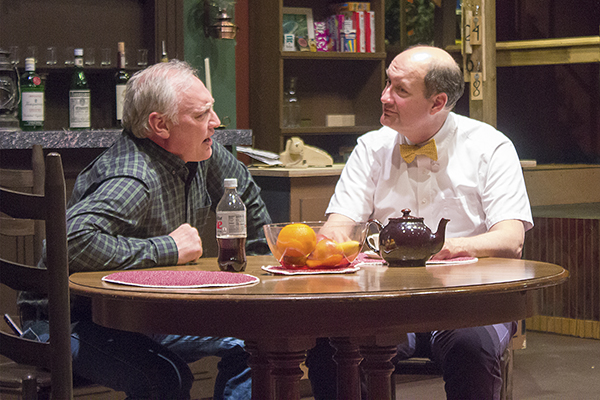 “The Foreigner” was originally on the stage in Albert Lea in 1988. Gordy Handeland will be directing the play again for the 2014-15 Albert Lea Community Theatre season. – Cathy Hay/Albert Lea Tribune

Mix a group of southern folks with two British visitors — one pretending not to understand English — at a Georgian lodge, add a sinister takeover plot and a few side stories, and the result is comedy known for its hilarity and wit. 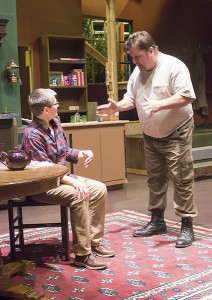 To commemorate ACT’s anniversary, the 2014-15 season features shows that were performed by ACT over the past five decades. ACT originally performed “The Foreigner,” written by Larry Shue, in 1988.

“It is very funny,” said Handeland, who has acted in and directed the play at different venues. “There’s one scene at the end that we can’t get through it because we’re laughing so hard.”

The cast of experienced actors includes Jay Paul as “Froggy” LeSueur, a British demolitions expert; David Behling as Charlie Baker, the “foreigner”; Karen Behling as Betty Meeks, the lodge owner; Patrick Menning as the Rev. David Marshall Lee, whose dark side shines brighter than his godly side; Michelle Neal as Catherine Simms, fiancee of the reverend; Mike Compton as Owen Musser, the racist villain; and Christy Compton as Ellie Simms, a character often likened to Forrest Gump.

David Behling’s main acting challenge is to not react to anything said around him, even when tremendously tormented. For the rest of the cast, one challenge is speaking in southern or British accents.

The farce begins when Froggy LeSueur, doing training at an American military base, comes to stay at a lodge owned by his friend Betty. He brings along his friend Charlie Baker, a proofreader by day and boring husband by night. Because of Charlie’s extreme shyness and marital troubles, Froggy manipulates him into pretending to be a foreigner from an exotic country who knows no English.

The rest of the characters assume Charlie can’t understand what they’re saying, so they carry on conversations as if he wasn’t there at all. For example, Catherine Simms informs her fiance, the Rev. David Marshall Lee, that he isn’t as sterile as he proclaimed and that she’s pregnant.

Meanwhile, Owen Musser, the county property inspector scheming to take over the lodge property, lures the reverend into his plot. Charlie overhears their plan to condemn the property so that David can buy it at a bargain price. In addition, Ellie Simms, Catherine’s slow-witted sister, appears on the scene, and David is obviously trying to make her appear to be an idiot so that she can’t inherit half the family money.

Everyone starts to like Charlie because he’s such a good listener — much better than anyone suspects. Ellie tries to teach him English, and does so well that she appears smart enough to inherit.

David and Owen soon appear with suspicious supplies, even explosives. Owen has enough weapons and uniforms to reunite the “Georgia Empire” of the Klu Klux Klan.

Froggy returns and is surprised at how well his shy friend is doing. Later, in private, Charlie reveals that he is having a wonderful time developing a personality.

Later in the play, Charlie turns the tormenting tables on Owen and David. Owen, unable to stand any further teasing, rages that the Klan will soon purge the land of foreigners. As Act One concludes, the power is out, the lodge is in virtual isolation and everyone turns to Charlie for a solution.

Will the Klu Klux Klan really appear? Will David be exposed for what he really is? Will Owen seize the lodge? Will Charlie settle in to “learn” more English or return to his miserable introverted state?

Find out the answers by visiting “The Foreigner” when it opens Thursday.