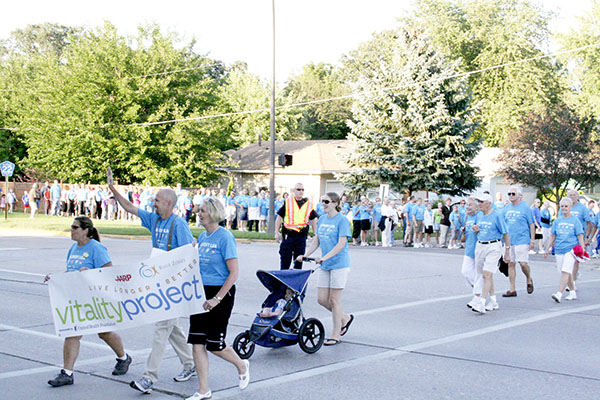 Participants in the 2009 walking moais cross the intersection of Bridge Avenue and Richway Drive at the start of the moai celebration in August 2009. Summer walking moais will kick off again on Saturday morning at Fountain Lake Park. – Tribune file photo

People of all ages, abilities encouraged to come for kickoff

People interested in building relationships while at the same time getting a little exercise are encouraged to attend the kickoff Saturday of the spring Blue Zones Project walking moais.

Walking moais are groups of people who will come together to walk at least once a week for 10 weeks in the community. There were more than 600 participants in 2009 during the AARP/Blue Zones Vitality Project. Participants then proved to not only get the health benefits of physical activity, but also new friendships.

“It’s all about getting together and experiencing connections,” said Stacy Palmer, engagement lead for the Blue Zones Project in Albert Lea.

A moai is a term that originates in the city of Okinawa, Japan, where children are put into small groups with other children when they are young. The children stay with the other members of their group throughout their lives. They walk together, talk together, garden together, eat together and share life’s experiences together. While they share the joys of life together, they also share the hard times, and as a result create strong bonds.

The goal of the walking moai in Albert Lea was to create something similar as in Okinawa, where people are engaged and connected to each other. The walking is a side benefit.

The kickoff will begin at 9 a.m. in Fountain Lake Park. People who register ahead of time will have their name put into a drawing for a Fitbit.

Groups who have already formed will be able to sign themselves up, while people who do not have a group can be matched with one based on ability and neighborhood.

“We’ve kind of broken it down so they’re matched with people who can really support them,” Palmer said.

At the event, participants will take place in a large community walk. People will be divided into two groups based on ability: One group will walk around Fountain Lake, and the other group will walk down Broadway to Main Street, up St. Mary Avenue and then back to Fountain Street to the park.

“We want families, people that work together, young and old,” Palmer said. “I feel like we’ve got it set up so everyone can be successful on this walk.”

More prizes will be given out at the conclusion of the 10 weeks.

Groups will track their minutes spent walking together. The group with the most minutes will be awarded a Fitbit for one member.

The Blue Zones Project is a partnership between Healthways Inc. and Blue Zones LLC. During the project, national experts and local leaders are assisting the city in developing a blueprint for making permanent environmental, social and policy changes. The changes aim to lead people to healthier behaviors and improved well-being.