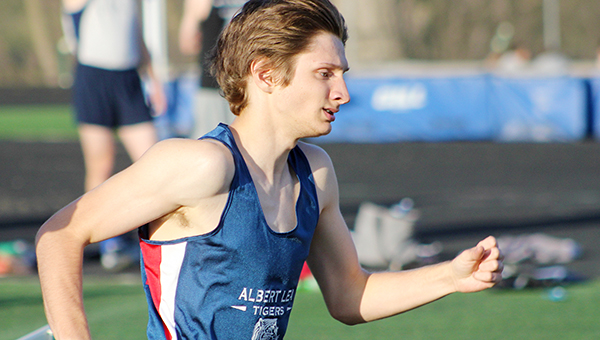 Tyler Anderson competes Thursday on Day 1 of the Section 1AA meet at Lakeville South. Anderson qualified for finals in the 800-meter run by taking ninth place with a time of 2:03.25. — Lon Nelson/For the Albert Lea Tribune

Two members of the Albert Lea track team qualified for finals, and the Tigers produced 13 top-20 finishes Thursday on Day 1 of the Section 1AA meet at Lakeville South. 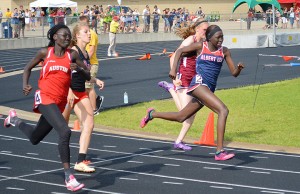 Tyler Anderson led the Albert Lea boys with a time of 2:03.25 in the 800-meter run to qualify for finals with a ninth-place finish.

“He ran well at conference and even better today,” said Tigers coach Kevin Gentz. “He ran a personal best and has a shot to place.”

Caleb Troe posted a time of 10:00.62 in the 3,200 to take third and edge Faribault’s Gunnar Miller by 0.37 seconds. However, Rochester Century’s Samuel Nelson and Seth Massot took the state-qualifying spots with sub-9:50 times.

“Caleb ran a great time,” Gentz said. “Kids have continued to drop times, which is the most exciting part.”

Jackson Goodell will look to qualify for state Saturday on Day 2 in the 1,600, along with the Tigers’ 4×800-meter relay team.

Lindsey Horejsi led the Albert Lea girls’ team by taking eighth in the 400 with a time of 1:02.56 to qualify for finals. Tigers coach Margo Wayne said it was Horejsi’s third time competing in the event.

“She’s really starting to get the hang of it,” said Wayne.

“The season always seems like it ends too quickly,” Wayne said. “I’m proud of their efforts.”

Next, Albert Lea will compete in Day 2 of the section meet at 11 a.m. Saturday at Lakeville South.