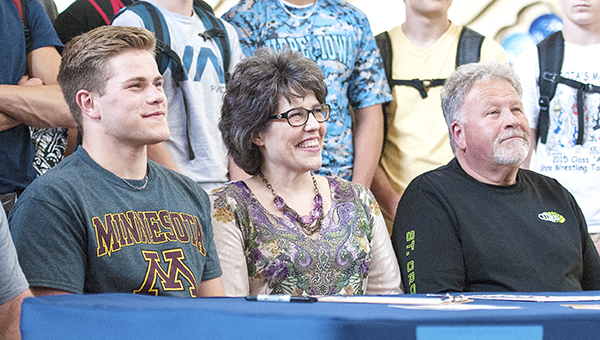 Tim Christianson, left, sits with his mother, Kim, and his father, Tim, before signing his national letter of intent to wrestle for the Minnesota Gophers Thursday at Albert Lea High School. — Micah Bader/Albert Lea Tribune

With the swipe of a pen, Tim Christianson became Albert Lea’s sixth wrestler to join the Minnesota Gophers. 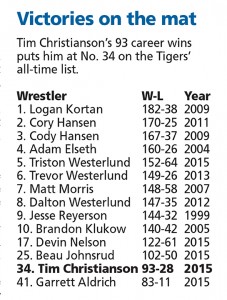 “It’s an awesome opportunity,” Christianson said. “When I met the other guys, you could tell they were top notch. I’m excited to get in the room and wrestle with them.”

At the Class AA state wrestling tournament on Feb. 28, Christianson took third place in the 182-pound weight class. He lost his first match, but rebounded with four consecutive wins, including a 3-1 decision over Zimmerman’s Austin May — the defending state champion — despite battling a swollen eye.

“Sometimes colleges like to recruit guys who placed third at state because it’s real tough to come all the way through wrestlebacks at a big tournament,” said Albert Lea coach Larry Goodnature.

Along with garnering All-State recognition for his third-place finish, Christianson was the Section 1AA champion and a Big Nine All-Conference selection. The recognition came after just four years with the Tigers’ wrestling program.

“I really want to thank Goodie,” Christianson said. “I started super late in ninth grade, and he just kept encouraging me and believing in me.”

Goodnature said Christianson made strides of improvement between his junior and senior seasons and continues to improve.

“He’s got the total package,” Goodnature said. “He’s got a great attitude, he’s committed, responsible, determined and has a great work ethic.”

Goodnature said he knows Robinson from the Gophers’ coaching clinic.

Christianson took his official visit to the University of Minnesota with his father and mother, Tim and Kim Christianson, from April 10 to 11. His father said he feels comfortable with Robinson and the program.

“They have a structured plan,” he said. “They take and develop people. Their development program is second to none.”

While in Minneapolis, Christianson stayed with Chris Pfarr, a three-time All-State redshirt freshman from Le Sueur-Henderson, who picked up 11 wins for the Gophers last season.

“He can start the program there and stay,” said Christianson’s father. “He doesn’t have to transfer.”

Christianson’s older brother, Jake Christianson, lives in the Twin Cities, which was a bonus for the family.

“It’s tough to say no, but he’s wanted to be a Gopher since he was a kid,” said Christianson’s father.

Goodnature said one of Christianson’s best assets is being receptive to advice.

“He’s very coachable,” Goodnature said. “He bought into the Albert Lea wrestling program, and that’s what he’s going to need to do at Minnesota: believe in the coaches and the program.” 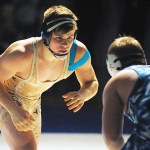 Tim Christianson of Albert Lea competes Jan. 26 during a dual at Owatonna. Christianson won a 19-7 major decision at 195 pounds. The Tigers edged Owatonna 32-27, went on to win the Big Nine Conference and Section 1AA titles and finish as the Class AA state runner up. — Micah Bader/Albert Lea Tribune 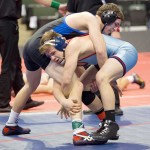