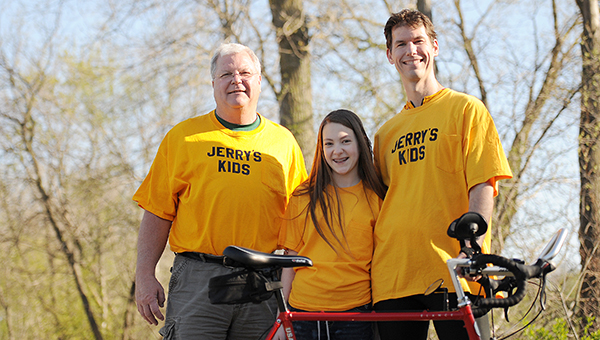 Training for the Land Between the Lakes Duathlon was a battle beyond physical conditioning for Chris Utz.

For the last year and a half, he’s been treating multiple myeloma — cancer of plasma cells, a type of white blood cell — with chemotherapy.

“It’s harder,” he said. “You just don’t have the energy some days. Hemoglobin carries the oxygen to the blood, and that’s dropped with the chemo. I can’t run as fast as I used to.”

Although his speed slowed, Utz hasn’t quit. He plans to ride his 1985 seven-speed steel-frame Trek Elance with a new cassette in the duathlon.

“The price was right,” Utz said about his ride. “It’s more of a classic.”

Utz, a physical therapist at Mayo Clinic Health System in Albert Lea for the last 18 years, said he enjoys competitive sports. As an athlete at LeRoy-Ostrander High School, he played football, basketball and golf and continued his athletic career on the basketball court at The College of St. Scholastica in Duluth.

Multiple myeloma isn’t Utz’s first clash with cancer. He was diagnosed with it during an annual checkup for brain cancer he beat nine years ago after a surgery, chemotherapy and radiation, he said.

Last year, Utz’s stem cell transplant was scheduled for after the duathlon, so he planned to compete. However, he tore his Achilles tendon playing floor hockey with his son, Ryan.

“We love it,” Utz said. “It’s a great family atmosphere.”

Utz’s relay team for the 1.6-mile run, 14.5-mile bicycle ride and 3-mile run consists of his brother, Patrick Utz, and daughter, Erin Utz. Erin Utz will take over for her grandfather, Jerry Utz.

“The patriarch retired as a participant,” Utz said.

The race will start at 9 a.m. Sunday at Brookside Education Center and will be timed by Pickle Events using Champion Chip Technology.

Lynn Scheevel, a member of the duathlon steering committee, said the event was organized by the Albert Lea Noon Kiwanis for the second consecutive year and will have changes. The distances on the course are measured precisely, and participants will receive a technical fabric T-shirt and a ticket for a post-race meal served by the 112 On Broadway.

“It’s very well run and organized,” Utz said. “There’s some families doing it, and then some really good athletes who will come in and blow your socks off. It’s kind of neat.”