American culture is a tapestry with threads of immigrant art 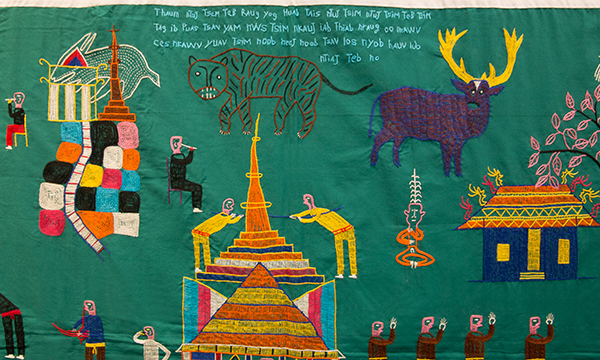 This Hmong quilt shows the many talents of the quilter who created the detailed images without a pattern and with many different embroidery techniques. – Photo courtesy of Teresa Kauffmann

Some have described American culture as a tapestry with individual threads representing the different backgrounds of immigrants.

Each thread keeps its characteristics yet together the strands weave a vibrant collage of language, traditions, music, foods and art. That collage is the idea behind the Immigrant Art Show at the Freeborn County Arts Initiative this month and next.

From bold Hmong quilts to whimsical Mexican piñatas, the art pieces tell stories of immigrants embracing their new country while keeping hold of their roots.

“These are all story threads,” said Susie Crane, with the Freeborn County Arts Initiative. 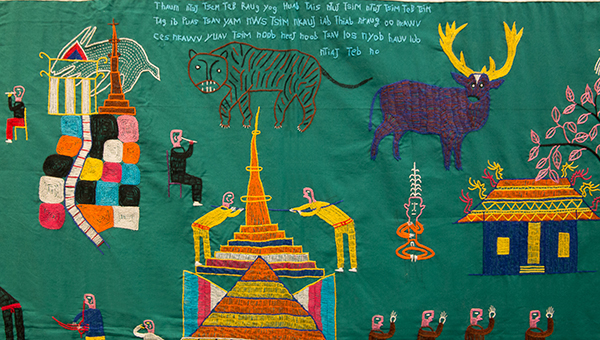 This Hmong quilt shows the many talents of the quilter who created the detailed images without a pattern and with many different embroidery techniques. – Photo courtesy of Teresa Kauffmann 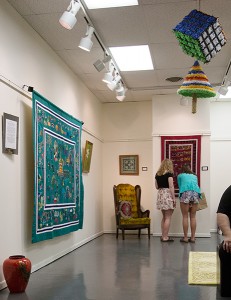 The Immigrant Art Show at the Freeborn County Arts Initiative includes Hmong quilts (hanging on the wall), Mexican piñatas (hanging from the ceiling) and other pieces that blend to make up American culture. – Photo courtesy of Teresa Kauffmann

The Hmong quilts are literally stories told with threads. November 2015 will mark the 40th anniversary of the Hmong migration to Minnesota following the war in Southeast Asia. Today, the Twin Cities metro area is home to 66,000 Hmong, the largest urban Hmong population in the United States, according to the Minnesota Historical Society.

Paula Michael of the Harmony Area Historical Society has loaned the two quilts to the Albert Lea show. A larger Hmong quilt is embroidered with people, animals and mythical creatures in swirling scenes of colors and actions.

A smaller Hmong quilt is embroidered with a story in English and detailed figures.

“This is just getting a grip with the language and being very brave with it,” Crane said of the quilter.

Pointing to various pieces, Crane said, “It’s the immigrant’s story — use what you have.”

“Winter Scene” by John Lacis, on loan from Joan Claire Graham, is a beautiful painting historically relevant to Albert Lea. The subtle aspects of the painting also tell a story of a struggling immigrant — the colors are muted, meaning the artist could work with a few paints; the frame is made from reclaimed wood, saving on the cost of a new one; and the framing is done with carpet tacks, again avoiding the cost of professional framing or purchasing special supplies.

John and his parents moved to Albert Lea from Latvia in 1950, having escaped the Germans and Russians, according to “Memories of the Lacis Family” by Julie Danielsen Godston that accompanies the painting.

“When people talked about expensive material possessions, Margaret (John’s wife) responded that she had all that before she left her old country. She would hold her hands to her heart and state that she now had American citizenship,” Godston writes in the memoir.

In this community dominated by Scandinavian influences, the Immigrant Art Show is a reminder that all residents are immigrants or descended from immigrants, unless Native American. And those immigrants include Bohemians, Hispanics, Africans, Asians and more.

Immigrant art is found everywhere in American culture, a reminder that art is about much more than masterpieces that hang on museum walls. The local show includes a gypsy violin from Germany, intricately inlaid with mother of pearl and abalone; an Irish treasure box made of wood; and other pieces by Americans