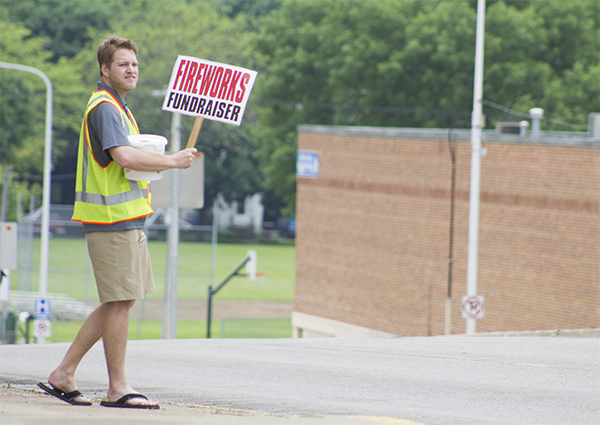 Jon Murray stands at the corner of Broadway and Main Street near Midwest Antiques on Friday to raise money for the Fourth of July fireworks fundraiser. — Sarah Stultz/Albert Lea Tribune

Area residents and businesses donated $16,551 on Friday during the annual fireworks fundraiser put on by the Albert Lea-Freeborn County Chamber of Commerce in partnership with KATE Radio. 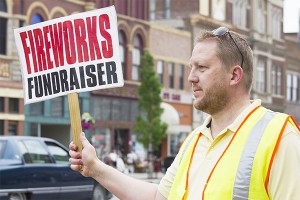 Ryan Cafourek was one of several volunteers standing out at the intersection of Broadway and Main Street on Friday to raise money for the Fourth of July fireworks. — Sarah Stultz/Albert Lea Tribune

Volunteers stood on the corners of Broadway and Main Street from 6 a.m. to 4 p.m., collecting the money, even enduring a few bouts of rain.

Kehr said there were several generous corporate gifts for the fundraiser this year, including Minnesota Corrugated Box, which donated $4,000 as a corporation and $1,736 from its employees. Other generous corporate donations were Mrs. Gerry’s and Albert Lea Select Foods.

He said he was also impressed by the many people who gave smaller donations. 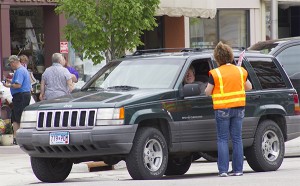 Volunteer Jackie Hillman talks with a motorist Friday during the annual fireworks fundraiser at the corner of Main Street and Broadway. — Sarah Stultz/Albert Lea Tribune

“We’ve seen it from all levels,” he said.

The fireworks display is over Fountain Lake.