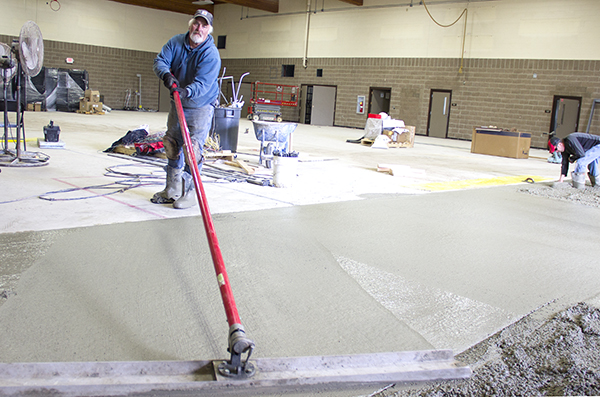 A contractor smooths out concrete in the gym of the National Guard Armory in Albert Lea on Tuesday. Some squares of concrete are being replaced as part of a larger renovation at the armory. – Sarah Stultz/Albert Lea Tribune

Work is ongoing in the National Guard Armory in Albert Lea as part of a $1.6 million renovation project to upgrade the facility.

On Tuesday, contractors poured cement to replace sections of flooring in the gym, and other crews worked on skylights for the building.

Furnaces will be updated to use natural gas, said Staff Sgt. Joshua Barker. 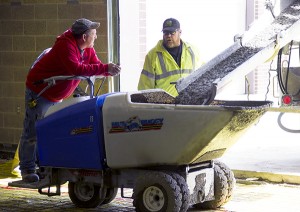 Two contractors talk as cement is poured in preparation for the floor at the Albert Lea National Guard Armory. – Sarah Stultz

Scepurek said crews will upgrade the fire alarm system for the building, along with telephone and fiber. There will be new display cases in the foyer, new toilet partitions and fixtures in the bathrooms and a new public address system.

The work comes as contractors recently completed work on the Austin armory and are just starting the design on the one in Rochester. The armory in Owatonna has almost competed the design phase.

Scepurek said the armory renovations are part of a larger effort to upgrade the older armories in the state. The last time the Albert Lea location was renovated was six to eight years ago when a new roof was installed. A parking lot was put in last fall. The building was built in 1988.

Scepurek said Gopher State Contractors of Rice is the general contractor for the project and was approved to start work in February. The company gets a year to complete the upgrades.

He said local Delta Company soldiers, which are part of the 2nd Battalion, 135th Infantry Regiment within the 34th “Red Bull” Division of the Minnesota National Guard, are serving in Austin while the renovations are under way.

Scepurek said the project is being paid for through a combination of state and federal dollars. 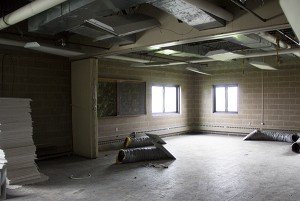 New windows have been installed at the National Guard Armory. Many rooms are also receiving new flooring. – Sarah Stultz

The armory is used for local training by National Guard soldiers and by the public in the event of an emergency.

Barker said the facility is also used for volleyball games by the city, along with some wedding receptions.