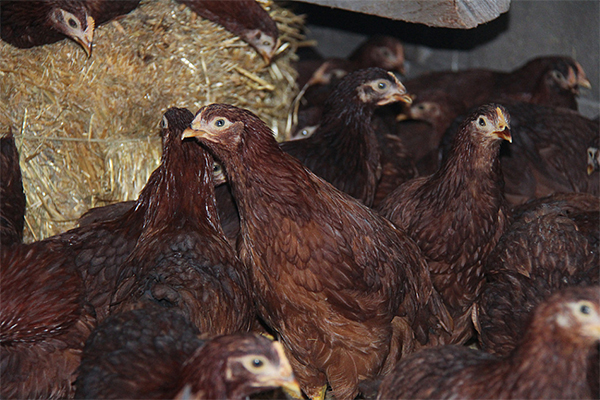 Chickens at Jared Krieger’s farm outside of Kerkhoven on May 6. — Mark Zdechlik/MPR News

Jared Krieger, a 19-year-old who is getting his start in farming, is worried — well aware the threat of avian flu is all around him. So far, seven farms have been hit by the virus in Swift County, costing farmers more than 500,000 turkeys.

“There’s been some barns getting closer and closer that have been infected and it’s getting me a little more nervous,” Krieger said.

Krieger’s farm in the eastern part of the county is near the border with Kandiyohi County, the epicenter of the outbreak in Minnesota. So far, avian flu has been detected on 32 farms there, where nearly 1.3 million turkeys have been destroyed. Despite all of the rotting carcasses in the area, there’s no discernible odor.

The H5N2 highly pathogenic avian influenza has spread so rapidly that it poses a huge concern for farmers. More than 5.6 million birds in Minnesota’s commercial and domestic poultry flocks have died or been killed to prevent its spread.

But the spread of avian flu in Minnesota appears to be slowing, Minnesota Board of Animal Health officials said Wednesday. By this time last week, nine new outbreaks had been reported. So far this week, investigators have identified only three more.

Still, no one knows where the disease fatal to poultry will appear next or when officials will get it under control.

Meanwhile, the uncertainty surrounding the H5N2 virus is casting a huge shadow over the state’s hardest-hit area.

Although U.S. Department of Agriculture inspectors recently confirmed that Krieger’s flock was healthy, news he found reassuring, the experience was unsettling.

“You know, it’s kind of weird having guys walking around in white suits testing your chickens,” he said.

Krieger’s concerns about the bird flu led him to scuttle his plan to let his chickens outside so they would have a little more space. He doesn’t want to take any chances of exposing them to the H5N2 virus.

“I’ve got a lot of money tied up in these chickens and I don’t want to risk … leaving them outside and having it transferred through wild birds, or through the air or however it’s transferring,” said Krieger, who is adding indoor space. “I want to give them ample enough room, so I’m going to put them upstairs in the hayloft.”

But all Krieger can do is hope confining his birds will be enough to protect them from a disease that mysteriously is making its way into barns.

He has a lot at stake. He’s counting on income from selling eggs this summer to pay the mortgage on his new farm.

So far, the avian flu outbreak in Minnesota has hit turkey farmers much harder than chicken producers. More than 4 million turkeys have been lost to the virus, compared to more than 1.5 million chickens.

The scale of the devastation in Minnesota could be much worse given what has happened in Iowa, where more than 25.5 million birds — mostly egg laying chickens — have been lost.

In Kerkhoven, a couple of miles from Jared Krieger’s farm, people are concerned about contracting the virus. They are fearful even though the strain currently circulating in the United States is not considered to be a risk to humans, said Scott Lamecker, who owns the general store there.

Still, officials can’t entirely rule out the possibility that it could move to people.

“They told us to be, you know, not be alarmed if we end up getting called to a turkey facility and we see people in hazmat suits,” said Lamecker, also an emergency medical technician and firefighter.

Although that call has not come yet, Lamecker can’t help but be more worried about what the avian flu outbreak will do to the economy in areas where poultry production is big business.

“It’s going to affect me because these farmers that don’t have birds, you know, they don’t have money to spend,” he said. “It’s just a domino effect that this virus has on the community.”

“I don’t think any one of us would have predicted that this was going to keep growing this big,” he said.

Kleindl said the economic effect of avian flu on residents is like that of a natural disaster. But at least when a tornado comes and goes, he said, it’s over. No one knows when or if the avian flu will go away.

One thing farmers can count on if they’re hit by the virus is a big loss of revenue — half their annual production, according to the Minnesota Turkey Growers Association. Infected flocks typically are suffocated with a smothering foam and often left to compost in barns for several weeks. The heat generated by the process kills the virus and leaves behind fertilizer.

It takes a farmer an average of three months to start over with new birds, officials with the growers association say.

At the Prinsburg Farmers Co-op in southwestern Kandiyohi County, George Parker recently sprayed a bleach solution on the wheels of a semi-truck that just weeks ago he was using more frequently to deliver feed.

The spray, Parker said, is meant to “disinfect any germs and trying to kill whatever diseases there are.”

These days, when Parker visits a farm, he wears disposable shoe covers. After he finishes, he leaves the blue booties behind and sprays his shoes and his floor mat with a disinfectant. But given the mystery surrounding the disease, no one knows whether the steps he takes are effective biosecurity measures to contain the H5N2 virus.

Sales at the feed mill have plunged by about 50 percent over the last three weeks, manager Dave Groen said.

“It’ll cost us a lot of money and not jobs right away,” he said. “We’ll try to get through it.”

If the disease doesn’t go away, jobs will be lost, Groen said.

Later this month, 233 people who work at the Jennie-O Turkey Store processing plant in Faribault, Minn., will be laid off because there are fewer birds.

While scientists continue investigating avian flu and farmers try to make sense of it, the disease is becoming a topic of everyday discussion.

Williamson’s agriculture literacy class recently began with an update of local outbreak statistics and a review of other related developments. The ninth graders then broke into small groups to discuss the growing problem.

“One group is going to address how you think the avian influenza outbreak is impacting the crop markets,” Williamson said. “The other groups discuss biosecurity and community impact.”

Williamson wants to give her students a place to talk about avian flu and get answers to questions.

“My home farm is in a quarantined area and I realized that if my farm was quarantined probably some of my students’ are too,” she said. “So about a week and a half ago I opened it up to discussion in all of my classes.”

Students already have discussed how the avian flu could cost jobs on the farm or processing centers like Jennie-O.

For the students and their families, and local officials, the uncertainty over avian flu has made planning for the future difficult.

Kleindl, the Kandiyohi County administrator, is bracing for the long haul.

“We’re hearing this could be an event that comes and goes,” he said. “This summer it may disappear and come back in the fall and next spring. So we have to plan for that.”