Her memorial service was at 11:00 a.m. April 24 at Second Presbyterian Church in Bloomington with the Rev. David Barton officiating. Visitation was from 9 to 11 a.m., April 24 prior to the service at the church. Calvert & Metzler Memorial Home in Bloomington was in charge of arrange 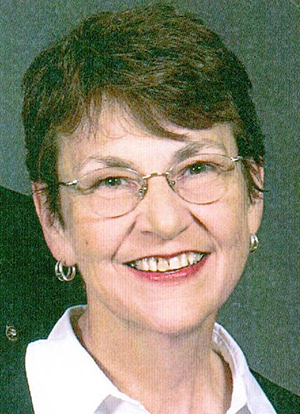 Barbara was born April 13, 1941, in Albert Lea, daughter of Franklin and Muriel Schneider Lindeman. She married the Rev. Michael D. McGaughan on Aug. 23, 1975, in Champaign, Illinois.

Barbara was a 1959 graduate of Alden High School in Alden. She received a Bachelor of Science degree in home economics from the University of Wisconsin-Stout in 1963 and later her master’s degree in textiles from Eastern Michigan University.

Barbara was an active member of Second Presbyterian Church in Bloomington where she sang in the chorale, was a member of the Sarah Circle and was coordinator of the American Red Cross blood donor drives at the church. She was also a member of Family and Consumer Sciences in McLean County and the HP chapter of PEO. She was an avid gardener, even to the extent of involving her grandchildren in her endeavors.

Barbara was devoted first to her Lord, Jesus Christ, then to her family, those she served in the community and the people who served with her. Her kind and loving spirit touched the lives of everyone around her. She will be greatly missed, but always remembered.

Her parents preceded her in death.