Funeral services for Bobbie A. Hamilton will be held at 11 a.m. on Monday at the Bonnerup Funeral Chapel in Albert Lea. The Rev. Matt Hundley will officiate. Visitation will be held one hour prior to the service. 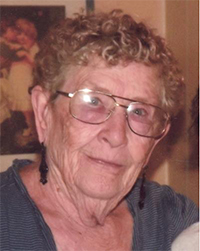 Bobbie A. (Henry) Hamilton was born on Sept. 21, 1940, to Robert and Beatrice (Cox) Henry in Caruthersville, Missouri. On April 18, 1955, she was united in marriage to Johnny H. Hamilton in Tupelo, Mississippi. She lived in the Waterloo, Iowa, area most of her life, until settling in Albert Lea for the past eight years. In Albert Lea, she was a member of Vineyard Church. Bobbie liked to garden, go to garage sales and take drives around the countryside. Most of all, she enjoyed the time she spent with her family.

She is preceded in death by her parents; husband, Johnny; daughter, Rhonda Hamilton; and siblings Darla Jane Henry and Dude Henry.