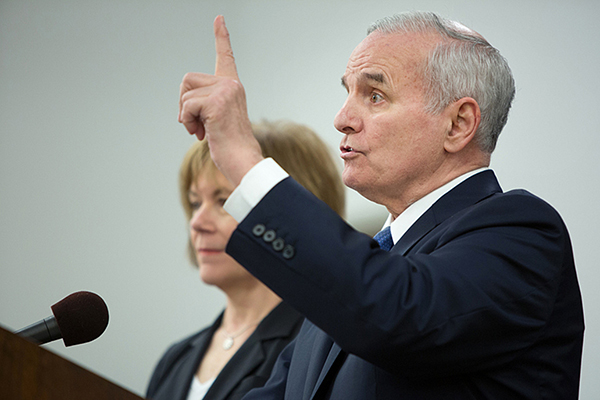 Gov. Mark Dayton’s veto of an education funding bill that does not provide money for universal pre-kindergarten did more than just send a strong message to state lawmakers.

Across Minnesota, school district officials also are grappling with the potential ramifications of the governor’s decision. The impasse over education funding at the Capitol has no effect on districts now, as schools are fully funded through June 30.

But if lawmakers cannot agree on an education bill by July 1, the state Department of Education would shut down, causing serious budget problems for the state’s schools. That poses key questions for state and local school officials, among them:

How would state
administrators respond to a funding crisis?

The state management and budget office, is planning for a cutoff in funding to schools.

Commissioner Myron Frans said his office would need to seek a court order to continue payments to schools, but they would be based on an old formula.

“It’s really all contingency planning right now,” Frans said. “We hope we don’t get that far and the special session resolves all the issues, but we do have to start planning and that’s what MMB is doing right now.”

How would a funding crisis affect school districts on July 1?

Many schools would remain open, but would need to send out layoff notices to more teachers and staff than they typically do.

A funding cutoff would present a dire situation for the handful of schools that receive all of their funding from the state, among them the Perpich Center for Arts Education in Golden Valley.

“Without a bill, and no contingency plans, then all activities cease,” said Sue Mackert, the school’s executive director. “And that means the layoff of all employees and the termination of all of our programs.”

At Perpich, that would mean the layoffs of 130 full- and part-time staff, Mackert said. A lack of funding also would put an end to the school’s summer arts camps.

How are school district officials handing the uncertainty over funding?

In Northfield, Superintendent Chris Richardson is putting together next year’s budget based on what he thinks the state might provide.

He is using fairly conservative numbers that provide for a less than 1 percent increase in funding for the 2015-16 school year, and a one percent bump in 2016-17.

“It would be like (if) as a homeowner or an average citizen you were waiting for 60 or 70 percent of your salary and not knowing what it was going to be for the next year,” Richardson said.

What is the mood of school officials and teachers around the state?

Even though they’re planning for the worst, school officials are optimistic lawmakers will settle their differences over education funding.

“We’re hoping they can quickly resume negotiations, pick up where they take off and get a final bill adopted pretty quickly,” said Scott Croonquist, executive director of the Association of Metropolitan School Districts.

Denise Specht, president of Education Minnesota, the state’s teacher union, also is hopeful that lawmakers can get their work done quickly. She wants lawmakers to consider tapping the more than $1 billion left in the state’s surplus to fund universal preschool and consider tacking on more money to the state’s per-pupil formula.

“I don’t think it necessarily has to take a long time,” Specht said. “Most of the policy work is done. We really need to address the funding. Minnesota needs to invest in its future.”