Coming together for a common goal 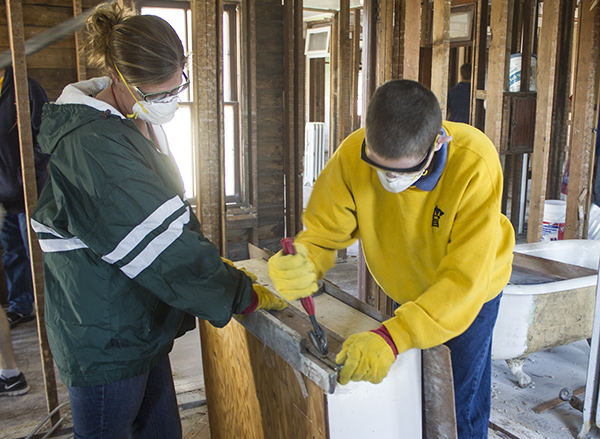 Thomas Wear, right, removes nails from a board on Wednesday at the former Hotel Washburn as Emily Schultz assists. Students from NRHEG are volunteering for demolition and renovations of the building as part of a class. – Sarah Stultz/Albert Lea Tribune

NEW RICHLAND — Work is under way in this small community to restore a former hotel into a food shelf and museum.

Thanks to about 50 students in a construction trade class at NRHEG and volunteers at other area churches, most of the interior walls in the building have been demolished. 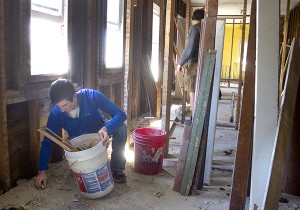 “It was a project that needed help, and we knew we could not afford it without a big donation of volunteers,” said Larry Goehring, president of the Area Food Shelf of New Richland.

The building, at the intersection of Broadway Avenue and Division Street, originated in the late 1800s and was last modernized 100 years ago. It was donated to the food shelf and the New Richland Area Historical Society by the State Bank of New Richland.

Plans are for the food shelf to be in the back portion of the building with the New Richland Area Historical Society in the front. Eventually the groups want to use the second floor for about four or five bedrooms of emergency housing with a common kitchen and dining area.

Knowing all of the work that needed to be completed, Goehring said a board member reached out to NRHEG Superintendent Dennis Goodwin, who thought some students might be able to help. Demolition started April 1.

After school is out for the summer, about 15 students will continue work through the summer. 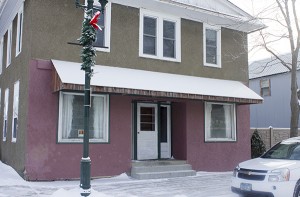 Work is under way to renovate the former Hotel Washburn for the New Richland Area Historical Society and Area Food Shelf of New Richland at the intersection of Broadway Avenue and Division Street in New Richland. – Sarah Stultz/Albert Lea Tribune

Brad Root, instructor of the NRHEG class, said while the work gives the students a chance to be a part of a community project, it also teaches the students — who are in ninth through 12th grades — everything from demolition, how to put in insulation and how to hang drywall, to name a few. They will work with professional electricians and plumbers as well.

“Later on they’re going to understand we learned a lot,” Root said.

Students are also working at Ellendale Elementary School and at a golf course.

The group of students at the building on Wednesday said they were proud to be a part of a community project and have enjoyed bonding with their friends over it.

Goehring said the hope is to have most of the work done in the museum portion of the building by Farm & City Days so people can come inside and look around.

The goal for the whole building is to be completed by the end of the year.

Barb Wildgrube, a member of the Historical Society, said she is grateful for the work of the NRHEG students.

“I think we’re still in shock yet,” Wildgrube said. “They work very hard, and it’s great to see the progress in what this building has been.”

In addition to the volunteer labor, the organizations have started to receive multiple monetary donations.

Pam Goehring, a member of the Historical Society, said the project received a $3,000 donation from Vista Covenant Evangelical Church in New Richland. It has also received $3,000 through another fund and stock that should be able to sell for $10,000. 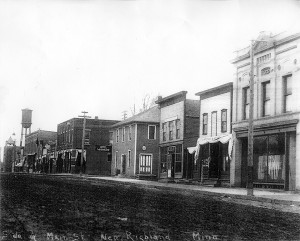 This historical photo shows the Hotel Washburn, center, where the New Richland Area Historical Society and the Area Food Shelf of New Richland plan to be housed by the end of the year. – Provided