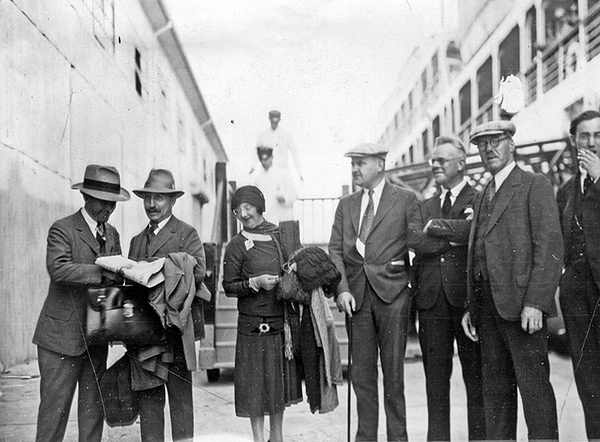 When President Obama announced in December that the United States would significantly change its policy toward Cuba, he opened the door to normalized relations and increased exchanges between people from both countries.

Within weeks, some of the nation’s top classical orchestras began eyeing a trip to Cuba, among them the Chicago Symphony, which in January announced that it would be the first North American orchestra to perform on the island in the new era.

But when classical music rises this week from the annual Cubadisco festival, the most important gathering of the Cuban music industry, it will be the Minnesota Orchestra that first graces the stage. The president’s announcement that his administration would begin easing the five-decades-long U.S. embargo of Cuba was too big a lure to ignore.

“I take credit for coming up with the idea and it was a crazy idea,” Minnesota Orchestra President Kevin Smith said. “And I hope that in the end it doesn’t prove to be crazy.”

For Smith, the cachet of being first to Cuba following an agreement announced by the president and Cuban President Raul Castro wasn’t the only reason to make it happen.

The orchestra’s journey to Havana on Wednesday also is another sign that the orchestra is surging back toward artistic and financial health after a wrenching 16-month contract dispute that kept musicians locked out of Orchestra Hall until early last year.

“We had been working so hard at Minnesota Orchestra to get back,” he said.

After emerging bruised from the lockout with a new contract, the orchestra has created a new relationship between management and musicians. The trip to Cuba is a chance to test the strength of those ties. It also will help determine if the organization is flexible enough to compete in the rapidly changing environment in which modern orchestras operate.

For Smith, there is an intriguing question that the organization has partly answered by planning the trip: How fast can an orchestra move?

“Typically we plan years in advance,” Smith said. “And if you wanted to be first you had to be pretty fast out of the box here.”

Although several major orchestras were considering a trip to Cuba, the Minnesota Orchestra had an ace in the hole — a strong relationship with Classical Movements, a specialized tour company with personnel that has longstanding connections in Cuba. At the orchestra’s request the company went into overdrive.

Within a matter of weeks, the Minnesota Orchestra had an invitation from the Cuban Ministry of Culture and a contract for a four-day visit to perform at Cubadisco. Smith said the project captured the imagination of everyone in the organization.

The first major tour since the end of the lockout also will elevate the orchestra’s profile, Music Director Osmo Vanska said.

“The news about the new trip to Cuba with the Minnesota Orchestra might be the best possible chance for us to show to the music business that we are back,” he said, “And playing really well.”

But even with the invitation, the work was far from over, particularly given the trip’s nearly $1 million price tag.

“The next issue was, ‘Well, how are we going to pay for this?’” Smith said.

So he turned to a board member and longtime supporter of the orchestra, Marilyn Carlson Nelson, and her husband, Glen. She quickly agreed to sponsor the trip to the Communist country, which she calls an exciting opportunity.

“We would be ambassadors not only for classical music but for our state,” she said. “And I’d say ideally also for freedom, the kinds of freedom that we enjoy.”

The orchestra faces likely deficits in the millions in coming years as it rebuilds financially, and the Nelsons say that by funding the trip they protect that effort. The organization won’t earn anything from its visit to the island, but it will incur real expenses.

The other players in the drama include the people of Cuba, where the average salary is about $20 a month. Tickets for concerts there will go to Cubans for about 10 cents, with tickets for non-Cubans costing about a dollar.

For pianist Nachito Herrera, who grew up in Santa Clara, Cuba, and received classical training on the island, the Minnesota Orchestra’s visit will be significant and long-lasting. No major orchestra has toured there since 1999.

In Cuba, he said, music touches everything.

“Yes it is going to be a big explosion,” said Herrera, who has played jazz and classical music in Twin Cities for the last decade and a half. “It is going to show to the world that my country is thirsty to exchange the different experiences with everybody around the world.”

The Minnesota Orchestra leaves early Wednesday morning for Havana. The concerts on Friday and Saturday evening will be broadcast live across Cuba.