Funeral services for Earl James Towne, 90, of Emmons will be at 10:30 a.m. Monday at the Emmons Lutheran Church. The Rev. Christopher Martin will officiate. Interment will be in Oaklawn Cemetery with military honors accorded by the American Legion Color Guard. Visitation will be from 4 to 6 p.m. Sunday at the Bayview/Freeborn Funeral Home and one hour prior to the service at the church on Monday. Online condolences can be left at www.bayviewfuneral.com. 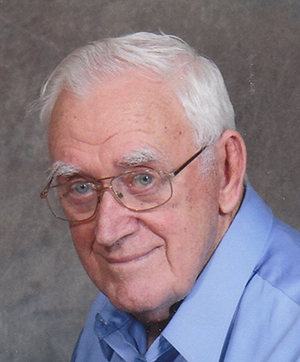 Earl James Towne was born on April 16, 1925, in Twin Lakes, the son of Harry and Jesse (Penrod) Towne. He grew up in Twin Lakes and went to District 45 Country School there. After his schooling, Earl joined the United States Army where he served in Greenland during and just after World War II. On Aug. 25, 1967, Earl was united in marriage to Dorothy Sorbo Hovland at Lunder Lutheran Church. Earl worked both as a farmer and as a mailman for the United States Postal Service. He was a member of the Emmons Lutheran Church, the Eagles and the Emmons American Legion. He enjoyed collecting coins, fishing and going on bus trips, but Earl loved spending time with his children and grandchildren most of all. He was also a history buff and a fan of the Minnesota Twins and Vikings.