Memorial services for Emma “Connie” Koch, 93, of Glenville will be at 10:30 a.m. Saturday at New Life Christian Church, 1705 SE Marshall in Albert Lea. The Rev. Mike Gerhardt will officiate. Interment will be in Hillcrest Cemetery. Friends may greet the family one hour prior to the service at the church on Saturday. Online condolences are welcome at www.bayviewfuneral.com. 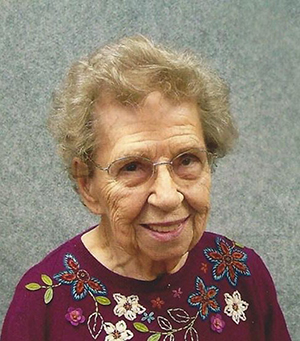 Connie completed her life on Tuesday, May 5, 2015, and began her heavenly journey, reuniting with her beloved husband, Kenneth, who died in 1981 and her granddaughter, Kayla Mae, who died in 2011.

Connie was born in Winnipeg, Manitoba, Canada on Jan. 20, 1922, the daughter of George and Rosina (Fey) Kuhnle. She grew up with seven siblings. After graduating from high school Connie attended business school and then worked for the Canadian National Railway in Alaska. It was here that she met Kenneth Koch who was serving in the U.S. Army during World War II. They were married on Feb. 8, 1945, in Marshalltown, Iowa, and settled near Glenville to farm and raise their three children.

Connie enjoyed traveling and spent quality time in both Colorado and Canada. She loved gardening, swimming and bird watching, as well as crossword puzzles and a good cup of tea. Peer counseling, the extension club and crocheting were some of her hobbies. She was a sincere friend to many, always remembering the names of everyone’s children and grandchildren. Connie always focused on the positive in others.

Connie was preceded in death by her parents; her husband, Kenneth; granddaughter, Kayla; and six brothers and sisters.