For the pursuit of trivia 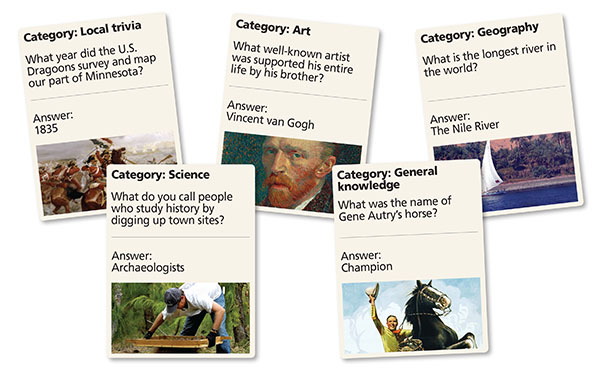 The questions and answers scattered around this page were read by Bev Jackson-Cotter of the Albert Lea Art Center on KATE Radio on Saturdays to promote the trivia contest. These questions will not be read at the actual contest. – Photos from public domain

What is the world’s longest running trivia contest?

That would be the Great Midwest Trivia Contest, founded in 1966, at Lawrence University in Appleton, Wis. It’s known as the longest running because of its custom of asking the last question from one year as the first question the next year. The contest runs for 50 straight hours every January. Questions have included:

Question: On what date does Bruce Wayne’s birthday fall?

Answer: The actor who played Batman was born on Feb. 19.

Question: What band did Kurt Cobain call the best band in the world?

Here are a few trivial questions about trivia:

Question: When was the game “Trivial Pursuit” invented?

Question: Trivia is a mainstay of what popular game show?

Answer: Jeopardy, which put a twist on traditional quiz bowls by providing the answer with contestants needing to come up with the right question.

Question: Where did the game app “Trivia Crack” originate?

Some questions appear frequently at bar trivia contests, like the following.

Question: What is the capital of Australia?

Question: What does Canberra mean in Aboriginal lingo?

Here’s a local question: What group is holding a trivia contest fundraiser on Wednesday, May 27?

The event promises to be a fun time, according to Marty Shepard, artistic director for the Art Center. Held at the Interchange, 211 S. Broadway in downtown Albert Lea, the event will start at 5 p.m. with wine and beer tasting plus complimentary appetizers. Tickets are $5 in advance — available at the Art Center on Clark Street and at the Interchange — and at the door.

At 6:30 p.m., players can put on their thinking caps and form teams of up to six people for the hour-long contest. There will be door prizes plus a $50 prize to the winning team.