Gardening is a learning experience 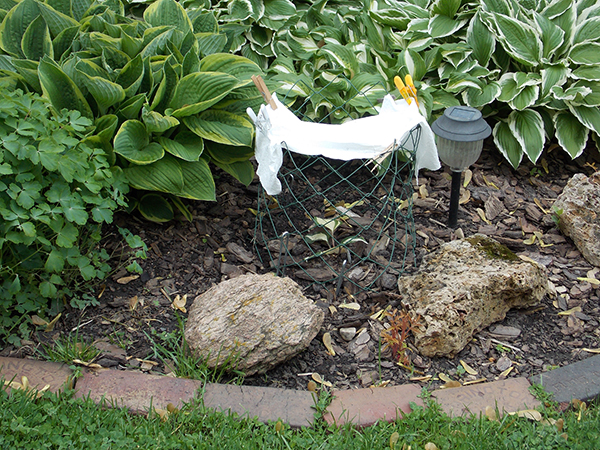 Sometimes it is necessary to take extra steps to protect plants in the garden such as this tent made to protect a newly planted hosta from the sun while it settles into its new location. – Carol Hegel Lang/Albert Lea Tribune

Gardening can really be a learning experience of highs and lows for even the most experienced gardeners sometimes have disasters. Last night as the weatherman talked about temperatures hitting the mid-30s I thought I had everything under control so that the containers I had planted, hanging baskets and new seedlings would be safe. The thermometer at my house showed 36 degrees at 6 a.m. with nearly calm winds, but the windchill factor was in the low 30s. Last night I covered plants, took the baskets inside the garden shed or put them on the ground next to the house and put packs of flowers waiting to be planted in the greenhouses or under the covered gazebo.

This morning as I made my rounds I noticed the flower packs under the gazebo didn’t look very good. Upon closer examination they appeared to be hit by the cold temperatures as they looked very wilted. Everything in the shed appears alright as do the containers sitting on the ground by the house, but the large container planting at the end of the driveway with angelonia is looking a bit on the droopy side.

Last year I waited to buy plants until Memorial Day because of the crazy weather and then everything I wanted was already picked over and not available. This year I shopped early and hauled the plants into the greenhouses at night and then outside during the day in protected areas. However with the warm temperatures a couple of weeks ago, I started planting up the containers. Most of them I cannot move once they are planted because they are too heavy. The lesson learned here is wait until Memorial Day to plant containers and then hopefully they won’t get nipped by the chilly temperatures.

Over the years I have learned some tricks that become helpful when establishing new plantings in the ground. First if they are flowering cut them back so as they start to establish a root system all of their energy goes to the plant and not the flowers. This is a hard one as we all want those pretty flowers, but in the long run it will be only a couple of weeks and you will have flowers again. This is especially important if you have taller plants. Cut them back so they bush-out and you will have sturdier stems on them for when they bloom. This way you possibly won’t have to stake them.

When I plant new perennials I always provide shade cover for them as they adjust to being in the wind and sun. For me the easiest way to do this is take a garden fence and surround the plant and then cover the top of it with either a piece of material, burlap or extra heavy duty paper towels that I secure with clothespins for about 10 days as the plant starts to adapt to the new conditions. Make sure you keep the plants well watered during this time.  Also larger plant containers work very well, but don’t give as much light.

If you’re like me and you have some large containers to fill with potting soil you can eliminate having to use so much expensive soil if you fill the bottom of the container with empty plant containers, milk or juice jugs or even Styrofoam packing peanuts. Make sure to cover the holes in the bottom of the containers with screening, coffee filters or paper towels so the dirt doesn’t fall through the holes. Old pantyhose also work well. I try to save the screening at the end of the season to reuse again the next year so that it doesn’t become another expense. I also reuse the soil in my containers for several seasons if they can be left outdoors for the winter months, but I do add a bit of new potting mix at the very top when I mix in the Osmocote fertilizer.

According to ProperlyRooted.com, recycling the containers at the garden centers also helps the environment. (Not all of them will accept them back so be sure and ask.) For me, as I work in the gardens, I try not to compact the soil by using pieces of cardboard to stand on to help distribute my weight over the top of the soil. It also comes in handy when I need to sit on the ground to do weeding.