Memorial services for Gary Legried of Albert Lea will be at 11 a.m. June 6 at Central Lutheran Church in Albert Lea. The Rev. Matt Griggs will officiate. Visitation will be from 4 to 7 p.m. June 5 at Bonnerup Funeral Service and one hour prior to the service at the church. Interment will be in Central Freeborn Lutheran Cemetery. 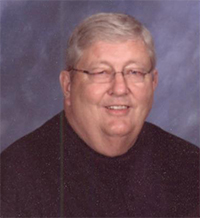 Gary was born Feb. 11, 1943, to Gilmer and Christine (Nelson) Legried in Albert Lea. He was baptized and confirmed at Central Lutheran Church where he had held several positions on church council, cemetery board and performed church maintenance.

On April 4, 1964, he married Catherine Higgins. They were blessed with two children, David and Theresa.

His work history started at the age of 15 after the death of his father. Gary worked for several farmers, and then was employed at Edwards Manufacturing for 30 years and Lou-Rich Inc. for 10 years. He also restored cars and painted and stripped semi tractors.

His best training was being the daycare provider for his two grandchildren, Mason and McKenzie, from the time they were 6 weeks until they entered kindergarten.

Gary also cherished the many vacations his son and wife planned each year. He saw many countries that he thought he would only dream about. His favorite was Ireland.

Gary will be best remembered for his many self-taught talents to fix, reconstruct and build anything. He willingly did this for his church, family, neighbors and friends.

He was preceded in death by his parents; brother, Claire, and his wife, Shelby Jean; brothers-in-law Vern Stern and Gary Arneson; sisters-in-law Deborah Higgins and Diana Ningen; and several aunts and uncles.

The family would like to thank all those that work for Hospice and for the wonderful care they gave to Gary and their family.