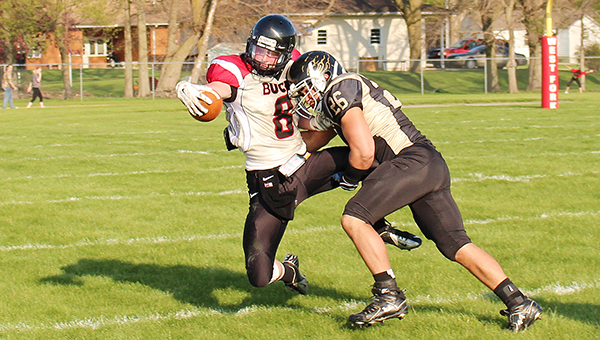 The Albert Lea Grizzlies football team beat the North Iowa Bucks 32-14 Saturday in its season opener at Rockwell, Iowa, according to a press release.

“The offense did a nice job putting points on the board but the defense never let the Bucks get into any rhythm,” said Grizzlies head coach Stephen Piper. “They have some very good offensive players. Our defense did a great job and kept them on their heels.”

The Grizzlies struck first when Brendon Brown took the opening kickoff 95 yards for a touchdown.

“That’s why he is back there returning kicks,” said Grizzlies defensive coordinator, Jeff Jimenez. “He’s an exciting player.”

The extra point was missed, and the Grizzlies lead 6-0.

Both teams punted after four plays their first possessions. On the Bucks’ second possession, a nine-play drive stalled on the Grizzlies’ 25-yard line when Albert Lea’s defense came up with a stop on a fourth-and-two. A Grizzlies fumble on the ensuing play gave the Bucks a first-and-10 on the Grizzlies’ 17-yard line. Nine plays later, the Bucks scored their first touchdown and tacked on the extra point to take a 7-6 lead.

The second quarter started with a Grizzlies punt. On the next possession, North Iowa was unable to manage a first down and punted. The snap went over the punter’s head and gave Albert Lea a first-and-goal on the Bucks four-yard line. Two plays later, Tony Tolbers scored Albert Lea’s second touchdown with a four-yard run. The extra point was missed, and the Grizzlies led 12-7.

With less than a minute left in the first half, Albert Lea’s Levi Fossen intercepted a Syverson pass.

The Grizzlies led 18-7 at halftime.

In the second half, North Iowa put together a 10-play, 60-yard drive that resulted in a touchdown. Syverson completed a 27-yard pass play to Tony Kuane that set up the score. The Grizzlies lead was four points, 18-14.

Following a Grizzlies turnover, the Bucks mounted a 10-play drive with first-and-goal on the Albert Lea seven-yard line. On second down, Syverson’s pass was intercepted by Fossen. The return was 56 yards to the Bucks 37-yard line. Eight plays later, Albert Lea’s drive was halted when a fumble on the Bucks’ 12-yard line gave the ball back to North Iowa. Albert Lea forced a North Iowa punt and took possession on their 37. The Grizzlies drove to the Bucks’ 15-yard line, but Juan Vega’s field goal attempt was blocked.

With seven minutes remaining, North Iowa fumbled on their own 25. Albert Lea’s Spencer Niebuhr recovered the ball, and Kaelyn Kohtz scored on a first-and-goal from the five-yard line to give the Grizzlies a 25-14 lead.

C.J. Sykes’ second interception led to Albert Lea’s final touchdown. Fossen took the snap and ran 49 yards to give the Grizzlies a 32-14 lead.

“The game was closer than the score indicated,” Jimenez said. “The difference was we made big plays when it counted.”

Next, the Grizzlies (1-0) play their home opener against the Buffalo Ridge Wildcats at 5 p.m. Saturday at Grizzly Field in Frank Hall Park.