Funeral services for Harold “Harry” A. Held of Albert Lea will be at 11 a.m. Thursday at Our Savior’s Lutheran Church in Albert Lea. The Rev. James Kassera will officiate. Visitation will be from 4 to 6 p.m. Wednesday at Bonnerup Funeral Service and one hour prior to the service at the church. Interment will be in Graceland Cemetery. Military honors will be accorded by Albert Lea area veterans groups. 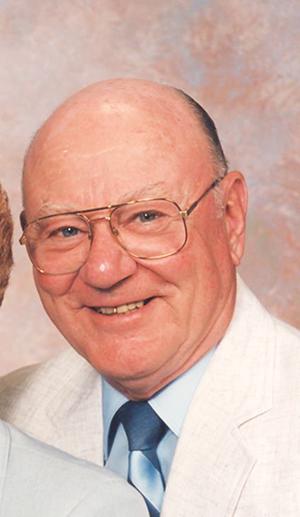 Harry was born October 16, 1924, in Chicago, the son of Harold A. and Anna (Sonluitnier) Held. He was baptized and confirmed at St. Paul’s Evangelical and Reformed Church of Franklin Park, Illinois. After graduating from Steinmentz High School in June of 1942, he joined the Navy and served until December of 1945. Harry served on three ships; the first was the Harrison Gray Ottis, the second was the Samuel Brannon and the third was the SS Jack Singer. His tours were in the European and Pacific Theaters.

On June 21, 1947, he was united in marriage to Carine (Dolly) Weberg at Our Savior’s Lutheran Church in Albert Lea. He was employed by Western Electric as a draftsman in Chicago. When Harry and Dolly moved to Albert Lea he was employed by Church Offset, Queens Products, Almco and Scotsman for 37 years, retiring in 1987.

Harry was an active member of Our Savior’s Lutheran Church where he served as both financial and special collections secretary for many years. He also participated in many volunteer projects. Harry was a member of Veterans of Foreign Wars and the American Legion. He enjoyed dancing, outdoor cookouts, Jarts, golf and always getting together with family.

Harry is survived by sister, Gerry Borrelli, of Bloomingdale; special niece and nephew Nancy and her husband, Tim Toft, of Ellendale; and many other nieces, nephews and cousins. Harry was a very special uncle to all of them.

He was preceded in death by his parents; wife, Dolly; and brother-in-law, F.J. “Wal” Borrelli.

According to his family, Harry was very appreciative to Dr. Vocal and Stephanie Lorenson for all they did for him. He was also very thankful for his two special caregivers, Corrie Archer and Sharon Friedman, and his care at Oak Park Place, Good Samaritan and St. John’s Lutheran Home. The family would like to thank Albert Lea Hospice for the wonderful care they gave to Harry.