Hugh Hall of Albert Lea went to his eternal home on Friday, May 1, 2015 at the Good Samaritan Society of Albert Lea. 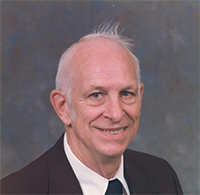 He was lovingly surrounded by his wife, Pauline, and his five children, Julie (Gary Reed), Lance (Penny), Kelly, Troy and Chris (Fatemeh). Funeral services will be held at 1 p.m. Tuesday at Salem Lutheran Church with an hour visitation prior to service. The Rev. Mark Niethammer will officiate. There will be a private family interment following the service. Military honors will be accorded by the Albert Lea veteran organizations.

Hugh Larson Hall was born in Winona on May 18, 1931, to Marion and Halbert Hall. Hugh’s father was an architectural engineer with the railroad — the family moved frequently. They lived in many states — Hugh and his brother, Larry, went to a new school almost every year, sometimes going to two or three schools in a year. Hugh graduated from St. Paul Central High School in 1949. He attended Macalester College in St. Paul for one year and the University of Minnesota for one year. He then enlisted in the Army for three years, spending most of that time in Germany. Shortly after Hugh came home from the service, he met and married Pauline Rystrom on Aug. 6, 1955. They met at Congregational Church in St. Paul where Hugh was a member. They spent the next four years in St. Cloud where Hugh attended college and received his degree in speech pathology. Their next move was to Albert Lea where he was the first speech therapist and began that program. He traveled to 14 elementary schools. In later years most of the country schools closed and those children came to Albert Lea. Hugh spent many years traveling to Mankato taking night classes and earned a master’s degree in speech. He enjoyed helping children with speech problems, and was especially happy when a prior student greeted him with perfect enunciation and told him about their professions and accomplishments and gave Hugh credit for their fine speech.

Hugh and Pauline have five children, 10 grandchildren and nine great-grandchildren. They also claimed two German exchange students (brother and sister Christian and Claudia Tuttlie). Each one lived with them for a school year. This was a special experience — their parents visited the Halls and Pauline and Hugh visited the Tuttlie family in Germany twice.

Hugh was known as the “The Alley Cat” on KATE radio where he worked part time for 43 years. He loved big band music and had a great following of the older set of people in the area. He and Pauline loved to dance and were members of the Stardusters, enjoyed going to the TERP in Austin, followed the Blue Banners and square danced with Grapevine Twisters. Hugh enjoyed family things, especially their cabin at Beaver Lake for 40 years. Hugh was a 10-year member of the Jaycees and was most proud of the work the men did to build Pickeral Lake Park. He also played slow pitch for the Jaycees, another family time. Hugh was a pitcher and his sons were bat boys, where a love for baseball was formed. Hugh was state parliamentarian for the Jaycees for many years and enjoyed the state meetings. His five kids thought he was the smartest man ever and often said, “Our dad does crossword puzzles with an ink pen.” Hugh also loved his church, Salem Lutheran Church, where he taught confirmation, was often council president and attended Bible study for 40 years. When his health failed and he couldn’t do steps any longer at the church, the Bible study group came to Hugh’s home, for which he was grateful. Hugh is a Bible scholar and he was a whiz on the Jeopardy game which he watched every day at 4:30 p.m. Hugh loved going to Mexico and he and Pauline looked forward to a week in the sun in the deep of winter. He took each of his five kids’ families to Mexico one at a time — quality time. Hugh and Pauline also took 16 trips with John and Donna Light and saw most of the states, Alaska and Niagara Falls. Hugh went shopping for all of Pauline’s clothes — shopped and surprised her for almost 60 years. His claim to fame was being Raquel Welch’s cousin (her mother and Hugh’s father were brother and sister.)

In Hugh’s final days, he was taken care of by the staff at Good Samaritan and hospice. The family will be forever grateful for their care and comfort.

This family will miss their dad, especially when they gathered at the table and their dad said “Grace.”