Funeral services for Julius C. Hansen of rural Hayward will be 11 a.m. Wednesday at Oakland Lutheran Church in rural Hayward. The Rev. Matt Williams will officiate. Visitation will be from 4 to 7 p.m. Tuesday at Bonnerup Funeral Service and one hour prior to the service at the church. Interment will be in the Oakland Lutheran Cemetery. 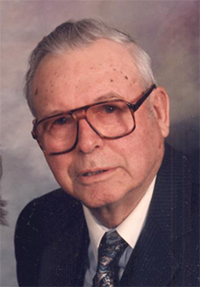 Julius Christian Hansen was born July 5, 1916, the fourth child of Hans Kristian Hansen and Hansina Dorthea (Jorgensen) Hansen. He was welcomed into a family which included his brothers Russell and James and sister, Eva. He was welcomed into the family of Christ at his baptism on Sept. 24, 1916, at Hayward Lutheran Church. He attended country school at District 132 Campbell School and was confirmed in faith in 1930 at Hayward Lutheran Church. Julius enlisted in the Army in 1936 and served at Fort Snelling in the third infantry for one year. He was discharged in order to return home to farm, but continued to serve in the National Guard until 1940.

On Nov. 19, 1941, Julius married Harriet Carol Aubrey at Oakland Lutheran Church. He and Harriet were active members of the Oakland congregation and gave their time, talents and treasure.

Julius served on the church council and building committee and taught Sunday school. He also mentored many confirmation students.

In 1949, Julius and Harriet adopted three boys — brothers David, Phillip and Marvel — who added much activity and love to their lives.

Julius was a lifelong farmer, living all of his 98 plus years on the farm where he was born. He enjoyed working with his herd of Holstein dairy cows and served on the Freeborn County Dairy Herd Improvement Association board. He also served on the Riceland township board for 30 years.

In later years Julius and Harriet traveled to Europe, Russia and China. He enjoyed gardening, bird watching, reading and activities at Oakland Lutheran Church. He was very fond of his pets and leaves behind his most recent dog, a black lab named Bean.

Mourning the loss of Julius but rejoicing in his new eternal life with his savior, Jesus Christ, are his church family, dear neighbors and friends, devoted caregivers Bridgett and Christian and faithful-to-the end friends Mary and Jan who on Julius’ behalf thank everyone who was a part of his long life.

Julius was preceded in death by his wife, Harriet, in 1999; and son, Marvel, in 2011. Julius also outlived his parents; siblings; in-laws; and cherished relatives and friends.