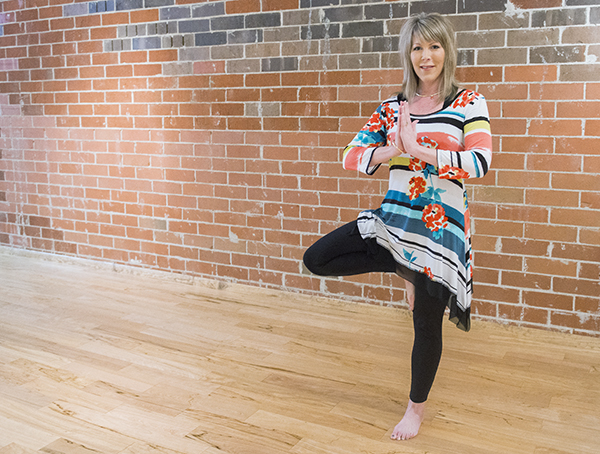 Judy Jensen opened Essence of Yoga in downtown Albert Lea in early May and had an open house at the new business on May 9. The studio features a yoga studio, a healing room and a gathering space. – Colleen Harrison/Albert Lea Tribune

Yoga enthusiasts and beginners now have a new place to advance their practice in downtown Albert Lea.

Essence of Yoga, 136 S. Broadway, opened on May 9 with an open house that was attended by close to 100 people, according to owner and yoga instructor Judy Jensen.

Jensen, who is originally from Clarks Grove, has been practicing yoga sporadically for a good portion of her life, but she became more serious about her practice eight years ago.

To learn more about yoga for herself, Jensen said she attended a yoga instructor class with no intention of opening her own studio. However, after she took the class she began subbing and teaching yoga classes for Community Education.

After a while, Jensen said she asked herself, “Wouldn’t it be nice to have one spot?”

For over a year, Jensen said she and her husband searched for locations for her studio, and they looked until they found the right space. Jensen said the downtown location was great, as she believes downtown Albert Lea is becoming a vibrant place to be and she saw potential in the space.

While Jensen, her husband and her father-in-law worked on the future studio, Jensen said other businesses downtown were very supportive and helped when they could by lending tools and equipment.

“They’ve kind of welcomed us with open arms,” Jensen said, adding that she wasn’t expecting it.

Jensen said she also received a lot of support from her family and friends.

Essence of Yoga features a yoga studio, a healing room and a gathering space with places to sit and drink tea.

Jensen said the healing room would be a good place for a massage therapist to take appointments. Currently she has a Reiki practitioner, Janna Lehocky-Arbik, offering her services there.

Reiki is a type of alternative medicine developed in 1922 in Japan, and uses a hands-on healing technique.

A little over a week in, Jensen said she’s happy with the number of people coming to class. She said she knows it can take a while to become established, but she also noted people who are interested in yoga will seek it out wherever they can.

However, Jensen said she still has room in her classes.

There are five classes per week at Essence of Yoga, and two instructors. Jensen is one of the instructors along with Sara Mentel of Austin. Jensen said she hopes to add more classes and instructors soon. One possible class that may be added is kid’s yoga, as Jensen said she’s had a few questions about it, she said.

Some of the classes Jensen offers at Essence of Yoga are restorative yoga, yin yoga and vinyasa.

Restorative yoga is focused on relaxation, which Jensen said is important, as many people are always connected and plugged in. She said it is important to unplug at times to take in silence and relaxation.

Vinyasa is a more active style of yoga, Jensen said. This type of yoga will build internal heat and Jensen said participants may break a sweat.

“But you feel really great when you’re walking out,” she added.

Classes are sold in packages — 10-class and five-class packages are available. Participants can also pay for just one class. The first class is $5, Jensen said.

The most common comment Jensen said she gets is people telling her they can’t do yoga because they’re not flexible enough or not in shape.

“I want to say, ‘exactly, it’s because you’re not doing yoga!’” Jensen said.

She said no one is flexible when they start out, but yoga can help improve strength and balance, as well as make people less reactive to life and take it as it comes.

A class schedule, as well as forms to enroll in classes and private appointments, are available on Essence of Yoga’s website, essenceofyogacenter.com.