Orville E. Courrier, 81, of Walters died Saturday, May 23, 2015, at Mayo Clinic Health System in Albert Lea. Funeral services will be at 10:30 a.m. Wednesday at the United Methodist Church in Wells. Visitation will be from 4 to 7 p.m. Tuesday at Bruss-Heitner Funeral Home in Wells, and will continue one hour prior to services at the church on Wednesday. Interment will be in Rice Lake Cemetery, Foster Township, Faribault County. The Rev. Paul Woolverton will officiate. Bruss-Heitner Funeral Home of Wells is in charge of arrangements. Please see www.brussheitner.com to leave online condolences. 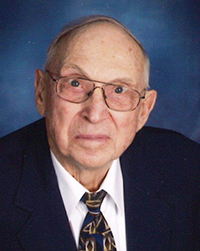 Orville Edwin Courrier was born Dec. 18, 1933, in Albert Lea, the son of Edwin W. and Agnes (Schneider) Courrier. Orville was baptized and confirmed in the Rice Lake Church. He attended country grade school and graduated from Kiester High School, the class of 1951. On Dec. 28, 1954, he was united in marriage to Margaret Ann Johnson at the Bricelyn Lutheran Church. He was a life-long resident and farmer by Walters, in Foster Township. Orville was a member of the Rice Lake Church until 1996 when the couple joined the Wells United Methodist Church. He served on the Rice Lake Cemetery Board and other committees. He enjoyed fishing, hunting, camping, farming and traveling.