Preserving the past in Albert Lea 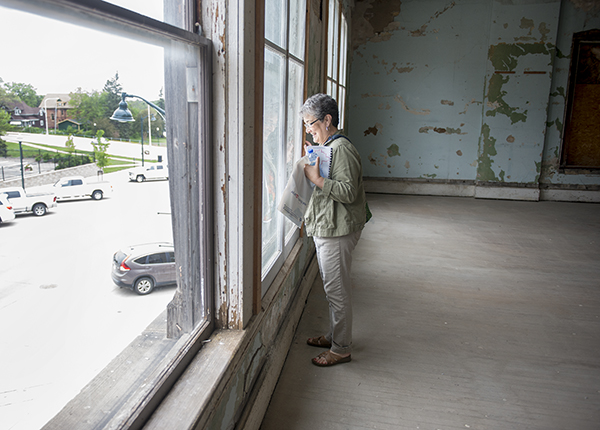 Dozens of Albert Lea residents reflected on the city’s history on Wednesday as they toured almost two dozen downtown buildings.

As part of the first-ever Historic Downtown Albert Lea Preservation Fair, the tour showcased historical buildings in different phases of renovation. Some had been renovated for use on the main level with the upper floors needing repair, while others had been renovated in entirety. Others needed work done throughout.

The goal was to raise awareness of the historic district and show people incentives for preserving buildings. Albert Lea has the largest intact commercial historic district in the state, according to event organizer Jennifer Nelson in an earlier interview.

With work done recently to spruce up the downtown, the city is making a push to encourage revitalization. Several businesses have remodeled, and the city has grants to renovate the front facades of downtown Broadway buildings. There are also other historic tax credits available, and the city plans to apply for additional state funding through a Small Cities Development Grant for owners who lease out their buildings.

As part of the tour Wednesday, people walked through the former City Hall, 200 N. Broadway, which was home to the Albert Lea police and fire departments, city offices and even the jail. Former firefighters talked about working at the building.

It is now home to ISC Financial Advisors on the main level.

Owner Rich Murray said he doesn’t know what he wants to do with the upper level, but he would like to restore the exterior of the building first, including tuck-pointing and replacing windows.

“There’s a lot of potential and a lot of neat things we could do here,” Murray said.

Amy Larson, of Glenville, was one of the people taking the tour on Wednesday.

Larson said she decided to attend because she wanted to find out more about the area.

Initially from Anoka, she said she moved to the area 25 years ago. Her husband, Rodney, is from Albert Lea.

“You drive by these buildings and you wonder, and now I can find out,” she said.

Taking pictures throughout the tour, she noted she was impressed with the staircase to the upper floor in the former City Hall. She also got a picture when Murray lifted up a door to show where the old fire pole went from the upper floor to the main floor.

Nelson said the former City Hall is the only building in the historical district that is standing by itself on both sides.

After the tour, there was a vendor exhibition in the Freeborn National Bank building, along with presentations about the economic benefits of historic preservation, among others. 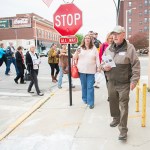 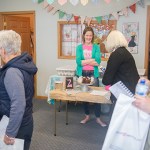 A group walks through what is now Kelly Gau Studio during a tour Wednesday of downtown Albert Lea. -Colleen Harrison/Albert Lea Tribune 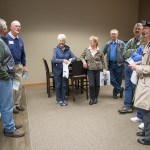 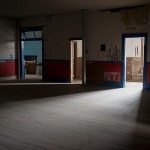 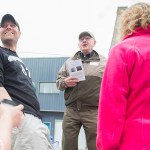 Roger Lonning pauses during a tour of downtown Albert Lea Wednesday to talk about the former jail. – Colleen Harrison 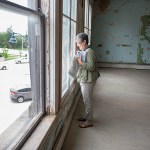