Richard passed away at home on Tuesday April 21, 2015, and at his request no service was held. Online condolences are welcome at www.bayviewfuneral.com. 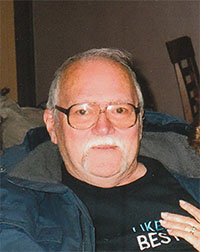 Richard Glen Kilian was born in Albert Lea on Jan. 20, 1942, to Raymond Roy and Ethel Agnes (Farr) Kilian. He attended school in Albert Lea, graduating in 1960 from Albert Lea High School. After graduation, Richard enlisted in the U.S. Army and honorably served his country until 1966.

On Aug. 26, 1961, he married Diane Rae Mills and from this union three children were born. They later divorced but remained good friends. Following the Army, Richard spent a 30-year career as a distinguished Department of Agriculture meat inspector, earning numerous awards throughout the years.

Proudly able to retire at 56, Richard spent every day thereafter doing what he wanted, when he wanted. In addition to being a life-long train enthusiast, Richard loved sports. He was an avid football fan, attending hundreds of college games and personally traveled the United States to see every team in the National Football League at least one time. For seven years Richard proudly watched his grandson Seth, play hockey and never missed a game both home or away. Richard was also a coin collector, league bowler for many years and had several collectible tractors and trains. Most of all, Richard enjoyed spending time with family and friends and — of course — eating out.

He was preceded in death by his parents Raymond and Ethel; sister, Louise Fox; brothers-in-law Steven Fox and Michael Rollins; and son, Robert, on Aug. 17, 1997.

For those who knew him best, there was always humor when Richard was around. He was very loved and will be greatly missed.